After more than two years under repair, the footpath up to Monserrate reopened yesterday, restoring access to the church for many Colombians.

The footpath was closed in late 2009 after landslides damaged it. The city took years to repair the path's lower section, and the church took even longer to fix up the several hundred yards it owns near the top.

The three-kilometer hike, from Bogota at 2,600 meters above sea level, to the church at 3,150 meters, is challenging and dramatic, with tremendous views of the city and Bogotá's Eastern Hills. The path snakes up the hill's face, giving you the impression that you're close, when several zigs and zags remain.

The trail was popular with many Colombians, particularly on Sundays. Some wanted to get exercise and fresh air; believers who could not afford the cable car ticket hiked up to the church, getting exercise as well as blessings. I even saw people doing penance by climbing the trail on their knees.

I always felt cheered seeing families hiking up together, often with their dogs - but more on that later.


A few very fit souls get up early and actually run up the trail. I've heard of people doing it in 20 minutes; I generally took an hour and a half.

Unfortunately, the climb is not the trail's only challenge. It's also notorious for muggings, which is why it's generally best to hike on Sundays, when there are many hikers and police.

When I visited today, a park employee warned me not to climb higher, because 'they'll take your camera.' A pair of junior police at the entrance gate checked people's bags - a pointless practice, since muggers just sneak across the hillside.

On Thursday, 1,268 people hiked the trail, according to press reports. Along with many other new rules, officials say they'll limit the number of hikers to 7,200 per day - one of many unenforceable rules.

I hope the trail recaptures its old spirit, but the officials appear to be doing their best to strangle it by regulation. A new sign at the entrance limits the early morning hours to 'sportspeople.' From 8 a.m. to noon, people can only climb up with tour operators. After noon, it's open to the public. Fortunately, these rules likely won't last. After all, who can say who's a 'sportsperson,' and restricting the trail to those accompanied by 'tour operators' will exclude common Colombians from morning hikes. And, in a city where it often rains a bit after noon, you've got to hike in the morning.

Officialdom has also sanitized the trail. The park employee told me they'd eliminated the informal food and drink kiosks that used to line the way. Sure, those places probably didn't practice top hygiene, but they did offer refreshing stops along the way, as well as bathroom breaks. If the kiosks generated trash, they also provided trash cans. Now, the snacks and bathrooms are gone. Those bathrooms probably weren't septic, but now expect to see hikers slipping into the bushes to do their business. Undoubtedly, the kiosk owners also discouraged robbery, which scared away their customers.

But perhaps the new rule which bothers me most is the prohibition against dogs, which will take away the hike's charm for many families, not to mention the poor dogs left at home. And dogs also have a safety role on a trail roamed by muggers.

The park employee also told me that the IDRD - which administers Bogotá's parks - intends to ban pets from all the parks, "because not all owners clean up after them." How about this: I propose that they also ban kids from the parks, since they tend to run around and make noise. 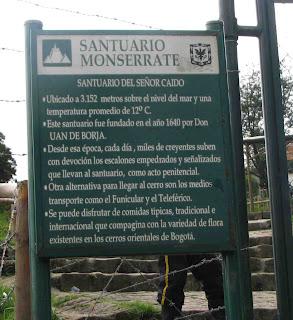 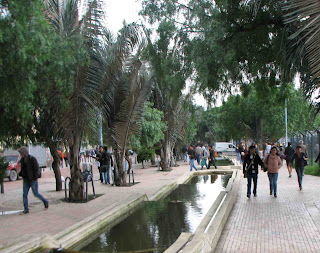 I'd rather go wed about 5:30 am and on saturdays in the morning. I'm making 35 minutes to the top now! it's an excellent exercise.
Last Good Friday 60 thousand people were reported to climb it... I saw the pics, it was so overcrowded that they had to descend through the hills of Parque Nacional.
I see police along the trail (even at sunrise), I hope they remain there.

When is it safe for a single woman to walk (or run) the path? Is it safe for me to go early in the morning (5:30-8:00)? Are the police there at that time, and are they present often enough on the trail?
Thanks so much! I enjoyed reading your description of the trail.

I'm afraid that I haven't been at the trail at that early hour, but I understand that many athletes climb up then. I'd just suggest going on a weekend/holiday when there are lots of people on the trail. There should be police there then, too.

If it appears sketchy, you could take the cable car instead.

Thanks, Mike! I had been thinking of going on Wednesday but I think I'll go Saturday instead to be sure there will be many others around.

Any chance you are the same Mike associated with Bogota Bike Tours? Either way, can you comment on bike tour options? I think I will take a bike tour on Wednesday morning.

if you want to be hike on a day with lots of people, Sunday's best.

Walked up the path today with my family. It was a little tough but not bad. Was me (38) wife (37), daughters (14, 12, 9). Got really congested 1/2 way up and we nearly didn't move for 10 minutes. sooo many people. I reccomend not going on a Sunday if you can help it but however you get there, it's worth it! PS. My wife and I broke the curse! We went up 16 years ago and have been happilly married for 16 years!!!

Yes, the trail to Monserrate is super congested on Sundays, especially this time of year.

On the positive side, I haven't heard of any muggings up there recently, on any day of the week.

Does anyone know if the trail can still only be traveled solo (without a group) in the early morning, before 8am? I would like to run it tomorrow around 9am but will get there earlier if traveling up with a group is required.

Hi Unknown - I haven't heard about any such rule about doing it alone. However, if you want to run it, best to go early when there are few walkers. Otherwise, you'll be walking yourself, or even standing in line.

Great, thanks for the tip Mike! I was referring to the "Horario de Acesso" sign in the last picture of your post, but maybe these rules are no longer in place. I am attempting to run it tomorrow around 7:30 so I'll report back.

Good luck. Do let me know how things go.

Went this morning to see the gate closed and a guard standing there. My Spanish is terrible but I gathered that it is closed all of today (Tuesday) but will be open all of tomorrow. I'm leaving Thursday AM so will try this one more time!

Phew that was exhausting. I went at noon and made it up in about an hour. Didn't feel unsafe at any point. There were lots of other people on the trail and I must have seen 30 police officers along the way. Amazing views at the top - I highly recommend!

Glad that you made it. I didn't know they let people start out so late, but maybe the Xmas season's a special case.