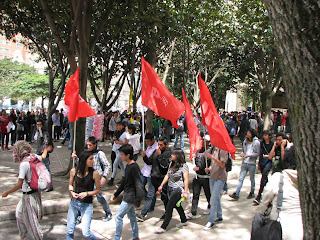 I say that today's protests may have been a last blast because today's El Tiempo headline reported that the president had offered to withdraw the Ley 30. But, last blast or not, the protesters clearly had a blast.

The protest march attracted street vendors, street entertainers and a variety of other leftist causes.

The protest climaxed soggily but happily in the Plaza Bolivar.