There's a tremendous irony in the fact that legendary cocaine kingpin Pablo Escobar's story has become a tourist attraction: after all, the tremendous violence the man unleashed made Colombia a no-go territory for tourists during Escobar's reign, and the cocaine trade continues sullying Colombia's international reputation, even tho the country's since become much more stable and secure.

Tourists visit Escobar's tomb, the site where he was shot dead on a Medellin rooftop and even meet his brother Roberto, who participated in the drug cartel, went to prison and now defend's his brother Pablo's legacy. Colombian authorities reportedly don't like the Escobar tourism, fearing that it will damage the country's image. 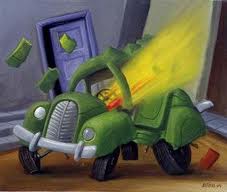 But Escobar is perhaps the most famous (or infamous) Colombian, making him a legitimate object of interest. But he should be portrayed as the terror he was, not the Robin Hood he pretended to be. Escobar did play Santa for children at Christmas, build neighborhoods for the poor of Medellin and provide jobs - but all of that was paid for by the sales of massive amounts of cocaine which ruined the lives of mostly poor people in the cities of the United States and Europe. And Escobar protected his drug empire with assassinations, car bombings and general terror here in Colombia.

People from Medellin have described to me the fear they lived in during the Escobar era, when any car could contain a bomb and one could get caught in cartel crossfire on any street.

Here in Bogotá, too, Escobar left a trail of mayhem and death. He helped finance the M-19's 1985 attack on the Justice Palace, which ended with about 100 people dead, the 1989 bombing of the DAS police headquarters, which killed about 70 people and the assassination of presidential candidate Luis Carlos Galan the same year. In 1989 Escobar also bombed a plane, killing all 110 people on board.

Some people idolize Escobar because he defied the authorities - but Escobar was no hero. Rather, he lived in luxury, partying with actresses, while others died and went to prison doing his dirty work.

Colombia is a free country, and those who describe Escobar as a hero have a right to - but open discussion should make the ugly truth about him win out.