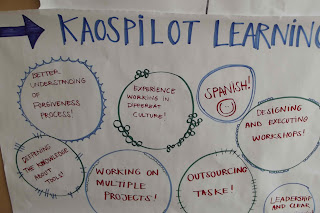 If you've traveled Bogotá's streets, you may think there's already too much chaos in this city. But some idealistic students from a novel Danish business school have brought more of it.

The three-year business school, Kaos Pilot, calls itself "a college for action-oriented revolutionaries." Three dozen students came to Colombia this year to learn by doing, working on initiatives such as a reconciliation group for victims of violence, business initiatives for displaced Afro-Colombian women, an art gallery, bicycling promotion and others.

Each year, the school sends students to carry out such projects somewhere in the world. Next year they'll be in South Africa.

The idea is for the projects Kaos works on to become self sustaining.

On that, Jonathan, a Dane, is optimistic.

"It's growing day by day," he says of the group's projects, "the snowball effect has really kicked in."

It's not clear how well the projects last year's Kaos group worked on - which also included bicycling and recycling - have done since. But enthusiasm and new ideas can never hurt.

Colombia has an unforgiveably high homicide rate, and perhaps that stems partially from cycles of violence and revenge. Kaos's reconciliation project works with victims of violence to break that cycle, says Aurimas, from Lithuania.

"When you're angry at someone it causes violence, and that violence causes more anger," he explains.

Most of the Kaos Pilots come from Scandanavian nations, but others are from the United States, Germany and even China.

For the students, most of whom come from decidedly non-chaotic nations, fast-growing Colombia has presented a dramatic change. They've gotten to know the city in various ways, including walking thru poor south Bogotá neighborhoods, visiting the huge Corabastos fruit market and even taking a walking tour of Santa Fe's red light district guided by a transvestite.

Will Bogotá harness its rapid economic and demographic growth to create an attractive and liveable urban center, or will transit, pollution and crime spin out of control and convert Bogotá into one of those Third World megacities in which the wealthy isolate themselves while the poor are forgotten? Bogotá already has some such characteristics, with its wealthy northern end and poor, crime-plagued south.

"Bogotá has experienced an incredible development," says Jonathan, who is visiting the Americas for the first time, "but it needs some structure, some development. It's been an explosion."

New Bogotá mayor Gustavo Petro has promised to make bridging those chasms a main goal of his administration.

Jonathan feels that, perhaps because of Bogotá's rapid transformation, many residents don't feel it is 'their' city. (In fact, ask many Bogotanos where they're from, and they'll name the small town where they were born, rather than the metropolis where they've lived most of their lives.)

"Our project is about creating the feeling of ownership and engagement," Jonathan says.

He also says it's important for Colombians to develop their own home-grown cultures, rather than importing them from places like the United States. Ave. Septima, one block east of Kaos's office, is lined with stores and restaurants featuring imported brands such as McDonald's and others, like 'Dollar stores,' based on foreign templates.

Among those whom the Kaos Pilot students are working with is Yo Creo en Colombia, which says it works to empower communities and "inspire Colombians to believe in Colombia." Ironically, its founder Pedro Medina is the man who brought McDonald's here. Perhaps he's since repented. One such project is to export that very Colombian product panela.

On May 26, the Kaos Students plan to organize 100 cultural events in one day. (The activity is open to more participants. Contact them here.)

"We're trying to get people to engage with their city," explains Jonathan. 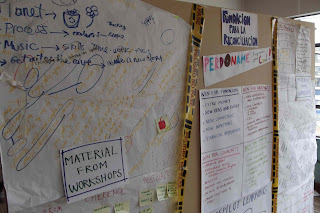 Aurimas, the Lithuanian, expects his Colombian experiences to serve him much better than conventional business studies would have.

"It's not just a matter of reading two books and writing a report and going out and working," he says of his studies.

This is Kaos Pilot's second and final year in Colombia. Next year, it's on to South Africa.