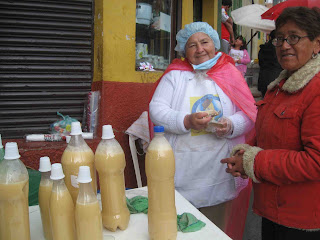 Every year, around this time, Bogotá's troubled hillside neighborhood La Perseverancia becomes a center of attention, music and popular culture - it's their annual Chicha Festival!

Chicha is a traditional Colombian drink made from fermented corn. (In other countries they make chicha out of other fruits and vegetables.) And La Perseverancia is Bogotá's traditional chicha-brewing neighborhood. 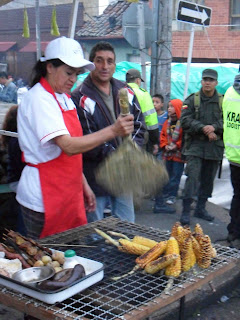 Much more than chicha was for sale at the festival. Corn on the cob is called mazorca in Colombia.

The La Perseverancia neighborhood, popularly known as La Perse, was founded to house the employees of the Bavaria Brewery, which was located directly downhill, across the street from what is today the National Museum. (The old brewery building has now been converted into shops and offices.)

The brewery's founder, Leo Siegfried Kopp, was a German-Jewish immigrant who helped his workers bring drinking water and other luxuries to their neighborhood. Today, Kopp's tomb in Bogotá's Central Cemetery has become a place of pilgrimage for people who call Kopp a saint and believe that he can do them favors. 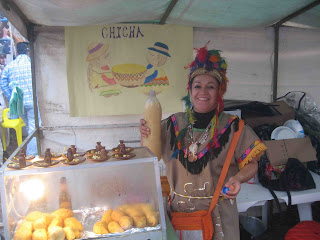 Chicha was first made the Muisca indigenous people, who also made chicha from yucca, pineapple and other crops. Today, across Latin America people make chicha from different fruits and vegetables. In some rural regions, the women start off the fermentation process by chewing the corn kernels and then spitting them out.

Much of the chicha is finally drunk in La Candelaria's Callejon del Embudo, right around the corner from Bogotá Bike Tours.

I've read a couple of your "entradas" on your Blog and I've liked them a lot, they are clear and nice.
You see both sides of the strory, the stereotypical colombia full of violence, inequality, poverty, drugs.... which is in part true and you see the bright, unique and beautiful things that make this country magical.


Keep up the good work!