A Taita in Trouble 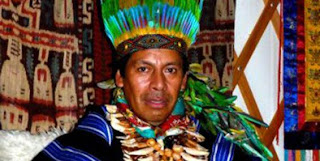 Taitas are indigneous medicine men (or women) who often use Ayahuasca, a psychedelic vine better known as yagé, in their religious rites.

In October Colombian taita Juan Bautista Agreda Chindoy was invited to the United States to hold a traditional yagé ceremony. But, upon arrival he was arrested and charged with drug smuggling because of the ceremonial plants he carried.

In Colombia, yagé has been used increasingly as a recreational drug by tourists and young Colombians. However, it's not likely to become an epidemic - after all, it's not addictive and causes vomiting and diarrhea.

Yagé is even less likely to become a scourge in the United States, where they've got lots of other mind-altering substances to worry about.

So, why is this taita in prison? Blind obedience of a pointless law. There's a campaign on to free this innocent taita. Contact: contact(at)freetaita (dot) org