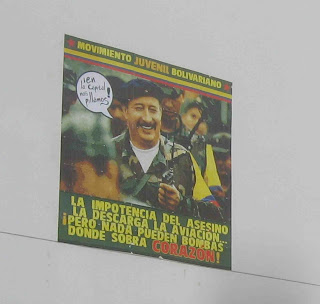 An Idealist?
In the National University's Plaza del Che someone's put up a mural celebrating Mono Jojoy, or Víctor Julio Suárez Rojas, the second-in-commando of the FARC guerrillas, who was killed by a military bombardment several weeks ago.
'The murder's impotence is dropped by the planes...
¡But bombs can do nothing where there's plenty of heart!'
-- Bolivarian Youth Movement
The National University, called La Nacho, is known for its leftist politics and colorful graffiti. Che Guevara's portrait is on the opposite wall of the plaza, which is known as La Plaza del Che. Beside Mono Jojoy is a portrait of Camilo Torres, the university's idealistic chaplain, who joined the ELN guerrillas in 1965 and died in his first battle. Accoding to the story, the pacifist Torres refused to pick up a gun. In those days, it was still possible to believe that the guerrillas offered a better solution for Colombia.
Mono Jojoy, in contrast, was a monster. He allegedly planned bombings which killed dozens of civilians and ordered kidnappings and extortion. Besides, he led a terrorist organization which plants land mines, recruits children, has driven millions of Colombians from their homes and has earned condemnations from many human rights organizations. His portrait has no place in the university, and much less alongside Torres.
In Colombia there's a saying: 'If you're under 30 and not a communist, then you don't have a heart. If you're over 30 and still a communist, then you don't have a brain.'
Postscript: After being stored for five months in Bogotá while officials tried to figure out what to do with him, Jojoy's remains were handed over to his half brother and buried in a South Bogotá cemetery called El Apageo. Already, a few people have come and left flowers on the tomb. The half brother had wanted to bury Jojoy in their hometown of Cabrera, but authorities said they feared that the FARC would come try to take away the body
Jojoy's tomb is monitored by cameras and security guards, who shoo away visitors.
By Mike Ceaser, of Bogotá Bike Tours
Publicado por Miguel en 6:05 PM