A Patch of England in Bogotá 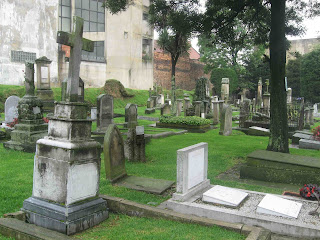 Our bike tours often visit Bogotá's historic Central Cemetery, with its 22,000 tombs, many of them elaborate above-ground artworks.

I'd been told that hidden alongside the Central Cemetery there existed an English Cemetery, and I'd passed by its shut gates thousands of times. Today they were preparing for Remembrance Day and so the gates stood open and we walked into a green expanse which conjures up a little bit of Albion in Bogotá. The forested cemetery of lawns and simple Protestant headstones contrasts strongly with the concrete and elaborateness of the multi-story Spanish-style cemetery alongside. (I'd choose the English Cenetery to rest in peace in, but the Central Cemetery, with its artwork and traditions, is lots more interesting.) 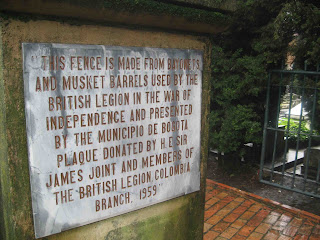 The cementerio inglés is Bogotá's second-oldest cemetery, and its origins are tied into Colombia's own birth. Colombia gave the land to the English government in gratitude for the British Legion's service in Latin America's revolution against Spain. (The English were neither altruistic nor anti-empire, of course. They wanted to weaken Spain and open markets for English trade - the same reasons why France had supported the revolution in North America.) The cemetery's gates were made from melted down muskets and bayonets used by the British Legion. Legion veterans were buried here, and later other members of the English community. Eventually, the cemetery also became by default the burial ground for many Bogotá Protestants seeking an alternative to the neighboring Catholic Cemetery. Today, the cemetery is only seldom used, we were told. 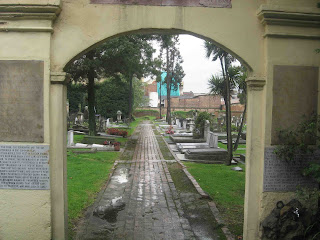 The British Cemetery is legally part of the British Embassy grounds. That makes it a "corner of a foreign field that is forever England," complete even with sentimental poetry about Albion. 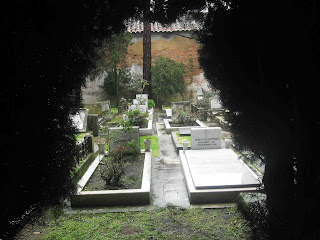 Also, see some photos on Flckr.

In recent years, Bogotá has converted the nearby children's cemetery into Parque del Renacimiento and plans to remove the nearby mausoleums and turn the area into soccer fields. It would be thoughtful of the British Embassy to open the unused part of its cemetery to the public, perhaps for cultural events or a space for art. It's a green, peaceful haven in the middle of the city, so it's a pity that it be closed off - especially as the area will become much busier whenever the adjoining Transmilenio station is finally, finally completed.

This is not Bogotá's only ethnic cemetery. On the Central Cemetery's west side is the German Cemetery and in southwest Bogotá the Jewish Cemetery.

Bogotá contains a surprising amount of English architecture, particularly in and around the Teusaquillo neighborhood, including this one-time housing block, now a small university: 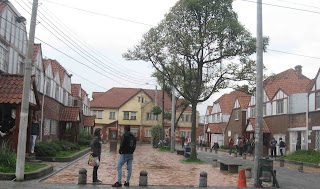 And the La Merced neighborhood, which was actually built by the British Petroleum Company during the 1930s and '40s for its executives. Few of the houses are still homes. There are offices, universities, a backpackers' hostel, private clubs and restaurants.
The sun will never set on the British Empire - as long as the sun shines in Bogotá!

In the early '60s of the 20th Century there was a fairly large British community in Bogotá and many of us were ex-servicemen of all three arms, the Royal Navy and Royal Marines, the Army and the Royal Air Force.
We had a very active branch of the British Legion and held functions to raise funds which were sent back to the UK.
Happy days¡

Interesting. I had no idea.

Thanks for the background.

I'm sure you know of the La Merced neighborhood near the National Park, which was built by British Petroleum during the 1930s and '40s.


My dad Bill Evans - RN 1933 - often walked around the cemetery I wonder if he saw it as his final resting place,no doubt also because it enshrines a lot of history. As it happened it was not to be he is resting in Braywick cemetery Maidenhead. I have personally never visited the cemetery but I must one day.

SO many of my friends' parents are interred here; all my father's business partners; the principal of my primary school, and even childhood friends who were murdered by the FARC. I walked in unawares of what was there, having come back after decades of absence from Colombia, having heard that one person I knew was there, and as I saw name after name that I recognized, I broke down sobbing.

Wow. Very moving. I had never heard of Brits being murdered by the FARC.

While it may be romantic to consider this cemetery a "patch of England", it is a misconception, perpetuated by movies and TV, that land owned by foreign embassies is technically "foreign soil". The land may be currently occupied by the British Embassy, but it remains Colombian soil and territory, at the host country's pleasure. Reference: Vienna Convention on Diplomatic Relations

I'm not sure where the information about the houses in La Merced being built by the British Petroleum Company came from but I would like to clarify that that is not really the case, most of those houses were commissioned by Colombian bourgeoise families, who had connections one way or another with Britain.
I'm a conservation architect and current student at Cambridge University developing my research on these houses for my Master's degree in Building History. I'm also the granddaughter of one of the engineers who built those houses back in the mid-1930s and 1940s.
It would be great if you could share have any specific source or information that I don't have where I can find that broken link with England, which is WHY the clients chose that type of Tudorbethan style and no other! Cheers