A Grave for a Great Man?

President Lopez Michelsen, who presided over Colombia - even if he didn't lead it - from 1974-78, left a mixed legacy. His presidency was marked by economic turmoil and corruption accusations - but Michelson also invested in rural areas, signed border agreements with Colombia's neighbors and built lots of infrastructure. Never afraid of taking strong stands, Michelson clashed with the Catholic Church by legalizing divorce and civil marriage. His party, the MRL, supported the Cuban revolution and allied itself with the Communist Party.


Michelson, a Liberal whose father was himself president two times, may have left his biggest impact 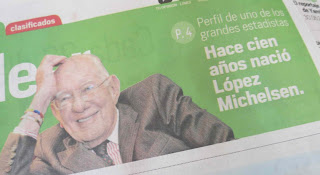 by helping endi the National Front agreement, in which the Liberal and Conservative political parties passed the presidency back and forth every four years. (The agreement was made to end the La Violencia.) After his presidency, Michelson stayed active in politics, writing newspaper columns and leading daring but ultimately unsuccesful initiatives, such as a prisoner exchange to free those kidnapped by the guerrillas and a plan for drug lords to turn themselves in in exchange for not being extradited. At the age of 90, he announced his support for gay marriage. He died in 2007, leaving his latest newspaper column half-written in his study.

Michelson has received a burst of attention this week, the 100th anniversary of his birth. El Tiempo called him 'The last of the great ones.'

But for years I've been fascinated by a more mundane aspect of Michelson's story: his extraordinarily humble tomb. It's just a grassy rectangle, often with weeds and some trash, near the entrance to Bogotá's central cemetery. Its plaque lists only Michelson's name and the years he was president - as if that was the only time that he actually mattered.

A cemetery visitor once blamed the small grave on the ex-president's 'ungrateful children.' Others have speculated that the family's waiting for the earth to settle or for his wife to pass away in order to build a tomb.

In any case, Michelson's resting place contrasts sharply with those of his ex-president neighbors, some of whom lie under grand memorials, and even the big, black marble tomb of Colombia's last dictator Gustavo Rojas Pinilla. The most extraordinary tomb of all, ironically, belongs to Michelson's father, Alfonso Lopez Pumarejo, who was president of Colombia twice, 1934-38 and 1942-45.

To me, Lopez Michelson's humility is all to his credit. If only more politicians preferred to spend money on their nations rather than their own legacies.

Miguel, awesome post. I did not know that he was so progressive and humble, thank you so much for this info.

Thanks Mauricio. He was certainly progressive, and took courageous and controversial positions. But I'm not sure how humble he was - except for his tomb.