A few months ago, police invaded El Bronx, the notorious drug-filled street near Los Martires Plaza. They,  cleared out the hundreds of shacks which residents had set up to live and do business.

This afternoon, police had the street's western entrance blockaded and were searching those who entered and exited. A few meters away, seated on the opposite sidewalk, a half dozen apparently homeless people were smoking bazuco, a cheap form of crack.

The authorities evidently are fine with drug consumption insid El Bronx, but want the vices contained there. 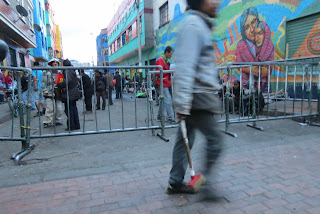 Back Into El Bronx


A Poet of the Bronx: Death, Drugs and Music

Hey Mike, have you ever seen Skid Row, the neighborhood in Los Angeles where a lot of homeless people gather to do almost the same than in El Bronx. Any way, I was there no to long ago with a friend taking some shots and, one of the homeless, a chicano guy jump on as and was trying to hit as with a bottle, he was so high, he could not even walk. I just can not imagine how bad El Bronx is.

No, I never visited Los Angeles's skid row, altho I have seen them in San Francisco and other cities. Many cities have them. I've heard that Vancouver, BC has got a neighborhood east of downtown full of lost drug addicts. But maybe other cities' skid rows aren't as concentrated or degeneraed as Bogotá's.

Hey, Mauricio, do you have an e-mail address? I want to ask you something.