For decades, the School of the Americas played a controversial role in Latin American politics. 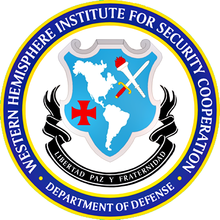 Founded in 1946 in the United States-controlled Panama Canal Zone, the school trained tens of thousands of military and police officials from Latin American countries.

Some of the school's alumni notoriously went on to commit severe human rights violations and even become military dictators, giving the school a sinister image among the left.

In 1984, the school was relocated to Georgia, and in 2001 renamed the Western Hemisphere Institute for Security Cooperation (Whinsec).

Through the school's first decades, when it concentrated on anti-communist training, as well as during its recent incarnation as a anti-narcotrafficking academy, many of the school's students have come from Colombia, according to the 2004 book 'The School of the Americas: Military Training and Political Violence in the Americas' by Lesley Gill. Between 2001 and 2003, 21 of the school's 88 Latin American instructors came from Colombia - more than from any other nation.

Under its new name, the school was supposed to place emphasis on protecting human rights, Pres. Bill Clinton said at the time.

However, a recent study by John Lindsay-­Poland of the Fellowship of Reconciliation found that a number of the school's Colombian ex-students were later implicated in or convicted of human rights violations.

For example, Mauricio Ordoñez Galindo taught a leadership course at the school in 2001-2. Back in Colombia, he commanded an anti-kidnapping unit. In 2009 he was charged with participating in the killing of four civilians and is now serving a 46-year prison term.

Maj. Alvaro Quijano Becerra and Capt. Wilmere Manuel Mora Daza taught courses about democracy in the school in 2003-4. Back in Colombia, they were charged a few years later with collaborating with outlawed paramilitary groups by leaking them military information.

Others have commanded troops allegedly responsible for murdering civilians, according to Lindsay-Poland's report.

Jaime Lasprilla Villamizar taught the General Staff and Command course at the school in the early 2000s. Back in Colombia, Lasprilla commanded the Ninth Brigade near Huila, which committed nearly 60 extrajudicial killings, according to Gill. Lasprilla was never charged in the killings and in 2009 was promoted to brigadier general.

The report lists some 14 of the school's alumni associated or convicted of human rights violations or other crimes. I have no idea what proportion of the school's ex-students that constitutes. But if the school is supposed to educate its students in human rights, then any participation in abuses seems to be too much.

Mike, your article came to me via Google Alert, and I thought to address some of the issues raised. First, while WHINSEC is not the 'same SOA,' it is a U.S. Dept of Defense facility with a similar mission as its predecessors. We teach courses that are standard U.S. doctrine, our students and faculty are both U.S. and international, and we are governed by the same military leadership that is responsible for all U.S. military training and education. International students and faculty come here just as they do to all U.S. government institutions, after clearance by the State Dept, which issues them visas. Thanks to your blog, I re-read John Lindsay-Poland's list, and find that exactly one person on it has been convicted of anything, two others 'charged' (without further info), and several in command of units that committed crimes. Not once does he make any connection between their association with WHINSEC and their later behavior. In all the history of these schools, no one has found an example of anyone using what he was taught for anything illegal. Back to the present, you can find out all about us on our public web site, but even more important to transparency, you can come to the Institute any work day, sit in on classes, talk with students and faculty, review instructional materials. You will need a photo ID to get onto Fort Benning (driver's license, passport), and I will give you directions to our campus. Lee Rials, WHINSEC Public Affairs

While it's true that only one person on the list may have been convicted, to me the point is that, if the WHINSEC is placing real emphasis on human rights training, one would hope that its alumni would do the same, and therefore those working with them or under them would not participate in abuses. As I said in the blog, it's difficult for me to judge what proportion of the ex-WHINSEC students have been associated with rights abuses, or whether this rate is more or less than for Colombian military officials in general.

The WHINSEC alumnis' association with rights abuses is, at the very least, disturbing.