The final candidates for Bogotá mayor have filed their candidacies - and made promises that only their mothers could believe.

Dionisio Araujo, the ex-president of the National Federation of Retailers, looks like the champion of promises. To eliminate traffic congestion, he promises to build urban freeways, eliminate intersections and traffic lights by building overpasses, and suspend the 'pico y placa' driving restrictions. Meanwhile, Araujo also intends to build a metro system.

To see how likely all those achievements are, just look at the success of current (suspended) Mayor Samuel Moreno, who got elected using similar wonderous promises. Instead, the only major project he's launched, building two new Transmilenio lines, is way over budget and behind schedule and has mayor's brother in prison and the mayor suspended from office and headed toward trial on corruption charges.

But Araujo will somehow whip the contractors into hyper-efficiency, eliminate corruption and manage to contract based on ability, rather than buddiness - despite the fact that he comes from the business world. Most fundamentally, Araujo will eliminate the law of traffic supply, demonstrated all over the world, according to which expanding road space only lures more cars onto the roads - quickly making traffic congestion as bad as ever. 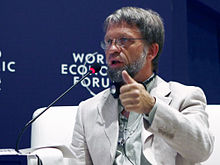 For his part, Antanas Mockus, who's already been mayor twice, promises that education will reduce crime, traffic jams and corruption. Mockus may very well win, as he's remembered positively for his campaigns to improve city spirit. But I really doubt whether street mimes and TV commercials, which he used in his previous terms, will make Bogotanos clean up their bad habits. If sitting in traffic jams can't teach people that cars cause congestion, then I'm not sure that Mockus can either.

On specific, gritty issues such as the proposed subway system and what to do about Seventh Ave., Mockus won't tell us, but promises to study them. It's always reassuring to know a leader's got a plan.

And Jaime Castro, another ex-mayor who just filed his candidacy (for the Indigenous Authorities of Colombia party, despite looking very white himself), promises to "save the city from the grave and profound crisis it's in" by, among other things, building not just an urban metro system, but a regional one. Perhaps Castro could look at Medellin, which in three decades has built only two urban subway lines.