With the approach of Christmas, retail space is rising in value, and that includes public spaces such as Bogotá's plazas and sidewalks. This was today's scene in Plaza San Victorino, which informal vendors had invaded with their clothing, toys, Christmas decorations and lots of other stuff.

Usually, the vendors spread their wares out on plastic sheets in order to be able to gather them up and escape when police approach. Here, the police go about shooing the vendors off, knowing that they'll return at their first opportunity.

Naturally, as Christmas nears, the need to sell turns into desperation, and I've seen street battles between the police and vendors involving tear gas and arrests. Many of the informal sellers on the plaza are indigenous people from Ecuador, who sometimes feel that the police unfairly discriminate against them. 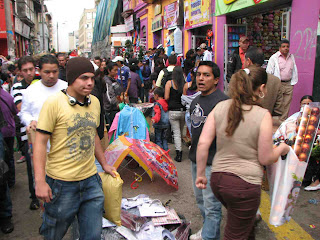