Thousands of Colombians marched today in protest against the FARC guerrillas and their practice of kidnapping. The FARC have been around for almost a half-century, but these protests were triggered by the guerrillas' recent murder of three policeman and a soldier whom the guerrillas had kidnapped and held in the jungle for more than a decade.

The FARC aren't likely to lay down their arms in response to the protests. After their cold blooded murders of the four kidnappees, the FARC said cynically that they 'regretted' the deaths. And the guerrillas' civilian support has dwindled to only a few percent of the population, mostly among leftist university students and peasants in coca leaf growing regions.

The guerrillas began in the 1950s as peasant armies fighting for the landless, but long ago lost their way. They now commit monstrous human rights violations, including kidnapping, recruiting children, driving peasants from their homes, planting land mines and forcing women guerrillas to have abortions. Colombia's government and military have also violated human rights - but at least a legal system exists to enforce some accounting on their part. You can't say the same about the guerrillas, for whom violating rights is standard operating procedure. Colombia's is also a very unequal society, with a small, wealthy elite and about half the population living in poverty.

But the FARC are no solution to these problems, and in fact make them worse. I shudder to think what would happen if a vicious organization like the FARC did somehow achieve power.

But even if one did swallow the idealistic rhetoric on the FARC's websites about revolution and social justice, it's more than obvious that the guerrillas are further than ever from taking over the state, and that they'll never achieve it. So, why not lay down their arms and end this almost half-century of suffering?

And the recent election of Gustavo Petro, one-time leader of the M-19 guerrillas, as mayor of Bogotá shows once again that legal, democratic routes to power exist, even for revolutionary leftists.

Refreshingly, this march was not monolithic in viewpoints. I saw demonstrators advocating the Humanitarian Accord, in which the government would exchange imprisoned guerrillas for hostages held by the guerrillas. The guerrillas also advocate the Accord, but Pres. Santos today repeated the government's opposition. The government says an exchange would only encourage more kidnapping and free guerrillas to continue killing and kidnapping. Other demonstrators urged us to find the solution in Christ. But Colombia is a highly-Catholic nation, so it's unclear why Christ hasn't already helped it.

Despite being weaker than ever, the FARC have shown few signs of openness to negotiations. But, with a huge income from the illegal cocaine trade, the government will have a hard time defeating them militarily. The strongest blow Colombia and the world could deal Colombia's guerrillas (and the Taliban and many other violent groups) would be to legalize and regulate illegal drugs. 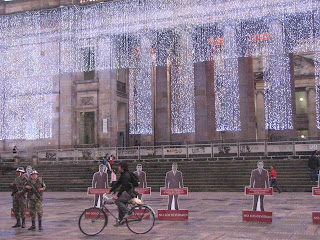 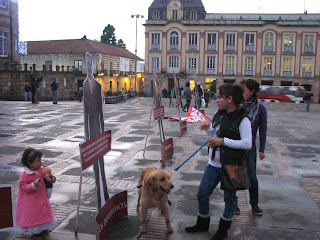 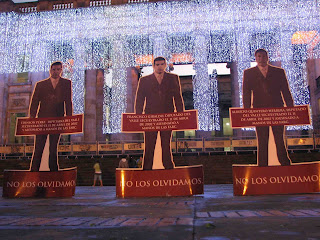 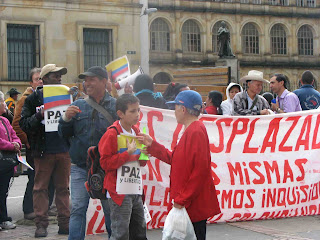 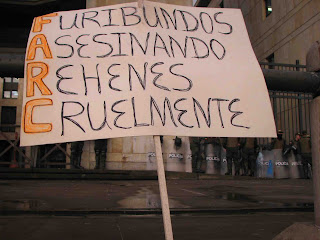 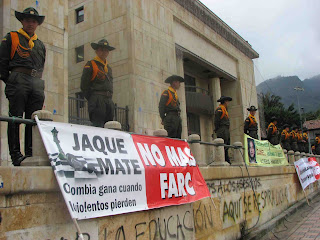 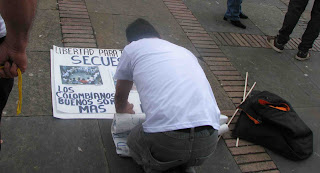 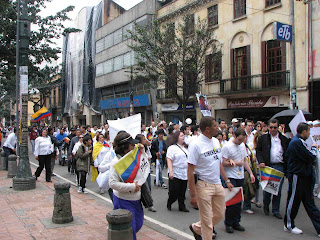 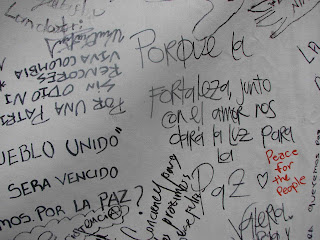 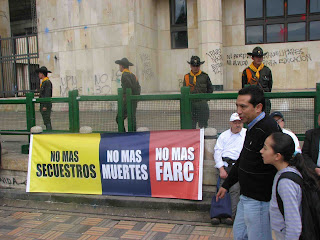 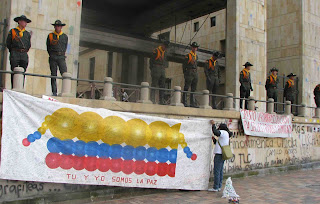