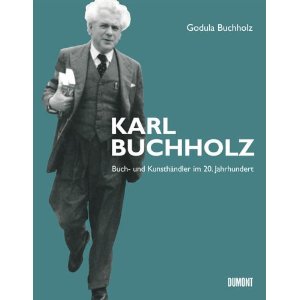 While reading about German immigration to Colombia, I discovered the remarkable story of Karl Buchholz, a German bookstore owner who became a minor legend in Bogotá.

Before World War II, Bucholz was a success in Europe, where he opened bookstores in his native Germany, Romania and Portugal, as well as an art gallery in New York. Some of his bookstores also included art galleries, which attracted important artists.

But then fascism tightened its grip on Germany. Buchholz's political leanings aren't clear, but he certainly believed in freedom of thought. In the face of the Nazis' totalitarian laws dictating which books could be read and which paintings displayed, Buchholz continued secretly showing work by artists considered 'degenerate' by the Nazi authorities.

If he'd been caught, Buchholz quite possibly could have been sent to a concentration camp and even murdered.

I don't know how Buchholz lived out the war, or if he even stayed in Germany, or why exactly he decided to leave Europe. In one interview shortly before his death, carried out in his book-filled home in north Bogotá, Buchholz said he had feared that communism, which also repressed art and literature, would take over Europe.

After the war, Buchholz emigrated to Bogotá, where he opened a bookstore on Jimenez Ave. and Carrera 8. Eventually, Buchholz and his sons Alberto and Godula opened several stores around the city. His flagship store on Jimenez, which occupied about five stores of the building, also included an art gallery. So, besides courage, give the man credit for persistance and believing in himself.

The area continues to be Bogotá's central bookselling district. Neighboring booksellers remember Buchholz's as being the best bookstore in Bogotá. Today, its building is occupied by a lottery store with offices above it, perhaps a sad commentary on cultural trends.

But with Buchholz's death in 1992 at age 91 and his son Alberto's death in an auto accident six years later, the stores closed, ending an important literary chapter in Bogotá.

The Buchholz Bookstore-Gallery of Bogotá.

Did a Great Colombian Hide a Nazi Past?

Hi Mike.
I met his son Albert when I was 23 years old, I remember getting Gunter Grass novel EL RODABALLO, and How Mr Albert Buchholz spent like 20 minutes telling me about Gunter Grass life and work. With my aunt Paz I met Karl Buchholz but I was just 6 or 7. I do remember his german accent.

Nice to hear about someone who really loves books.

Today it's a restaurant
http://dondealmorzamos.blogspot.com/2011/05/theca.html

Hi Mike, At this moment Me and some friends are reopening the librery in the same building. I think in August is going to open the door to the public and we hope that the spirit of Buchholz this again with us. You'r always welcome!

Congratulations. Look forward to it. The other day the guys at the Pensamiento Critico bookstore were saying how much they'd admired Buchholz.

This just came out:

That's very timely and troubling. Buchholz evidently collaborated with the Nazi regime (before the war) and benefited by hawking artworks which they disapproved of. But, as the articles say, it's possible that he was at least partly motivated by a desire to save the 'degenerate' art by moving it out of Germany.

I'm cynical, and tend to believe that people's motives are usually self-interested, and that any supposed altruism is really a justification.

The revelation about Buchholz's past reminds me of the story of anthropologist Gerardo Reichel-Dolmatoff, who made a great name for himself here as a humanist. But recently, years after his death, it was revealed that back in Austria during the 1930s he was an assassin for Hitler. - Mike

I should add that there's of course no comparison between Buchholz's actions, which appear immoral and unethical, and Reichel-Dolmatoff's, which were murderous.