But few can compare, in size, originality or environmental soundness, with the one made by homeless people Manuel and his friends Gloria and Vicky on a corner in a rough section of Bogotá's Los Martires district.

They made their nativity scene - bigger than  ones in many a mansion - out of objects scavenged from Bogotá's trash piles and sidewalks: an old doll, a piece of tinsel, a ribbon, a stuffed animal, old compact discs...they all added to the collection covering some six meters of sidewalk beside the little wooden shack the three inhabit.

Manuel, who's lived on Bogotá's streets for 18 years, says he's been building nativity scenes for the last dozen years. Each year the scene gets bigger, he said. After Christmas he gives the pieces away to kids and then starts collecting all over again.

Manuel said the group spent months collecting the objects and some three weeks assembling them into the huge nativity scene, or pesebre. The scene is a work in progress, however. The three friends live by pulling anything useful out of Bogotá's trash and selling it. So as long as objects are to be found on Bogotá's streets, the nativity scene will keep growing. 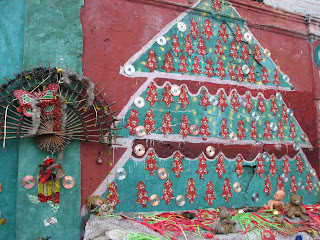