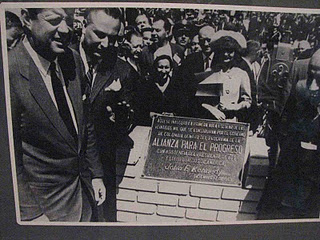 Today is the 50th anniversary of U.S. Pres. John F. Kennedy's 1961 visit to Bogotá. Kennedy came ostensibly to promote the Alliance for Progress, a Washington-backed development effort. But his visit was more about the ongoing Cold War and Washington's desire to keep Bogotá firmly within its orbit.

"Today we face our greatest challenge to the vitality of our American revolution. Millions of our people -- scattered across a vast and rich continent -- endure lives of misery. We must prove to them that free institutions can best answer their implacable demand for social justice, for food, more material welfare and above all, for a new hope - for themselves and for their children."

"We in the United States have made many mistakes in our relations with Latin America. We have not always understood the magnitude of your problems or accepted our responsibility for the welfare of the hemisphere."

...a warning against communism....

"They promise free elections, and free speech and freedom of religion. But once power is achieved, elections are eliminated, speech is stifled and the worship of God is prohibited."

...and one outright lie: "We deny the right of any nation to impose its will on any other."

Just eight months before, the Kennedy administration would back the failed invasion of Cuba at the Bay of Pigs.

That same day, Kennedy had visited a south Bogotá neighborhood where the U.S. was financing a housing project for the poor called 'El Techo.'

Kennedy was popular throughout much of Latin America, both for his idealism and for being the U.S.'s first Catholic president. (He was the second U.S. president to visit Colombia, after Franklin Delano Roosevelt in 1934.) But his goals, for all their good intentions, were not to be fulfilled.

Two years later, Kennedy would be assassinated in Dallas. Colombia named a south Bogotá neighborhood in his honor, but today it remains a poor and troubled part of the city.

With the presidency of Lyndon Johnson, the U.S. turned inward, preoccupied with Civil Rights and domestic poverty, and soon after became obsessed with the failing war in Vietnam.

Today, Latin America continues to be burdened by poverty and inequality. Cuba remains a thorn in Washington's side, and socialist rhetoric - if not reality - has received new life from a new generation of leftist leaders in Venezuela, Ecuador and Bolivia.

Great blog! I wonder if Kennedy would have done more for Colombia if he had lived to be a full term president? Maybe there would be more than just a neighborhood named after him.

Maybe. I'm with those who suspect that if Kennedy had won a second term, he wouldn't have gotten the U.S. trapped in Vietnam, which would have left open potential attention for the rest of the world.