Tomorrow, April 9, is the anniversary of the assassination of populist leader Jorge Eliecer Gaitan, whose life and legacy marked the 20th-century in Colombia and whose death split Bogotá's history in two. 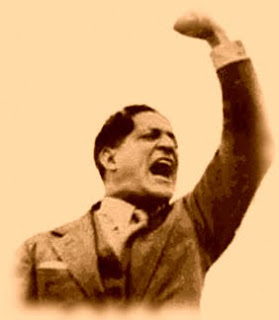 Gaitan became famous for denouncing the 1928 massacre of banana workers on strike against the United Fruit Company. In 1948 he was going to run for president, but was assassinated in downtown Bogotá, apparently by a mentally ill man, whose motives are still unknown. (Shades of JFK.) Gaitan's assassination triggered huge riots in Bogotá, called El Bogotazo, and across the country.

In the decades since, Gaitan has become an icon of Colombia's left. But like many icons, he's been simplified into a one-dimensional figure symbolizing rebellion, anti-imperialism, social justice and all the rest. But listen to recordings of his fiery speeches denouncing the the 'oligarchy' and you might conclude that Gaitan's assassination saved Colombia from even worse class violence.