But the idea of such locations, where addicts can find what they crave in a healthier environment, as well as recieve other kinds of support, is used in Canada, Denmark, Switzerland and other places, and presumably works, since they've continued the policy.

And why not try it? After all, the situation could hardly be much worse, with drug addicts wandering many streets and plazas begging for coins and occasionally stealing to get that next fix. If you pass thru certain neighborhoods, then you've had to walk around homeless people sleeping it off on the sidewalk, and sometimes even defecating and urinating in public. It's unpleasant for passers-by and certainly miserable for the homeless, who may live in filth, cold and the rain and feel enslaved by their addictions.

I talked to Andres, an acquaintance who lives in La Candelaria and said he consumes marijuana and bazuco, a cheap and poisonous form of cocaine "but much less than I used to."


Andres opined that support centers could improve the lives of addicts and also reduce crime. He suggested that addicts should have to contribute something in return for recieving their fix - such as cleaning up the street.

"If they know that 'I'll sweep these two blocks and then get my vice,' then they'll be less likely to steal," Andres predicted.

The mayor suggested that one of the support centers could be placed near Martyrs Plaza and El Bronx, an area of addicts and human wastes. A police officer there was dubious about the idea.

If they receive free drugs, "the addicts will just sink deeper," he said.

But he agreed that if the program were combined with rehabilitation, it could be positive.

The officer also warned about such support centers' impacts on neighbors. However, it's hard to imagine anything worse than the situation which already exists on and around Martyrs Plaza, one of the country's most important historical sites, where drug addicts and drug addled people wander day and night. Support centers could provide, in addition to cleaner drugs, needle exchanges, bathrooms, nurses and perhaps even psychologists. The policy would cost money, but could ultimately save money in improved public health, lower crime and a generally saner city.

The mayor's idea and the reactions to it are also indicative of Colombia's contradictory, even schizoid drug policies. While I talked to the officer, a few feet away other cops frisked young men for drugs - even tho the Supreme Court recently ruled that carrying and using a 'personal drug dosis' was a constitutional right, and even Pres. Santos has said that drug decriminalization is worth considering. But, to my question, the officer replied that the police did not recognize any such right. Yet, a few blocks away at a hip hop concert in Tercer Milenio Park young people were openly smoking pot. 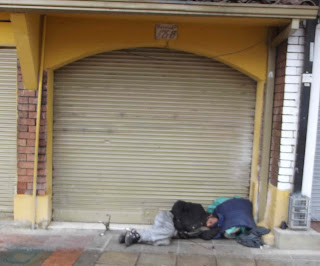 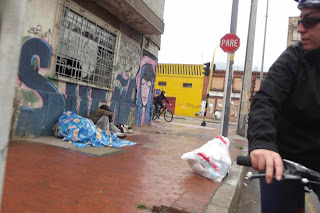