'If the media didn't exist, then there wouldn't be terrorism.' 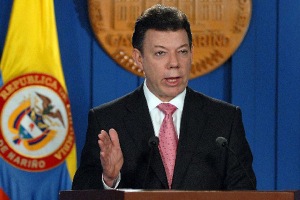 'If the media didn't exist, then there wouldn't be terrorism.'

That was a surprising and disturbing comment from Pres. Santos, reminiscent of some of ex-Pres. Uribe's ideas. Santos was speaking in Cartagena, when he made the very true observation that terrorists live off of the attention they receive, mostly from the media. But Santos then went on suggest that some journalists arrived at the scenes of guerrilla terrorist attacks suspiciously quickly - suggesting that they had foreknowledge of the crimes.

It may certainly be true that some media organizations here - most prominently Venezuelan-run Telesur - may sympathize or even support the guerrillas, the president shouldn't toss out such grave accusations without offering evidence. It's particularly surprising coming from Santos, whose family is the historical owner of the El Tiempo newspaper, which of course reports fully on terrorist attacks.

While it is true that such groups would probably lose much of their motive for causing terror if nobody heard about it, that's only possible in a dictatorship. Santos has his own motive for wanting coverage limited - the attention is hurting his popularity and his chances for a second term. The real solution to this violence is addressing its sources: poverty and the illegal drug trade. For that, the world should give serious consideration to another of Santos' proposals: drug decriminalization.

Santos must be particularly and understandably frustrated by recent guerrilla attacks near the Pacific Coast town of Tumaco, which have left the area without electricity for a week. In fact, several workers sent to repair power poles bombed by the FARC were killed by land mines apparently laid by the guerrillas.

Tumaco is a small, most Afro-Colombian town, whose humble residents are exactly the sort of people whom the guerrillas say they are defending, not terrorizing. But the region is also a valuable cocaine-exporting region, and guerrillas, narcos and paramilitaries all want to wrest its control away from each other and the state.

The region's long-suffering residents, who also include many indigenous people, are caught in the middle.

"We don't understand why our region has been hit so hard by violence," Tumaco Mayor Victor Gallo Ortiz, "we don't know what to do."

Everybody should sympathize with Mr. Ortiz and the people of Tumaco. But intimidating the press is not the solution.