Back Into El Bronx

When I read in this morning's paper that the police had cleared out El Bronx, the notorious street of drugs, prostitution and stolen goods in central Bogotá, I thot: 'Well, another era's over, wonder where they'll go next.' In 2005, the city had razed El Cartucho, a vice- and crime-saturated neighborhood just a few blocks east, and replaced it with Parque Tercer Milenio.

Whether out of cowardice or wise prudence, I'd never entered El Bronx, but I had heard lots about it: About the open drug dealing within, the crack dens, the child addicts, the prostitution and the selling of stolen goods; But also about the lives and the economy of what is also neighborhood, including small businesses like barbers and restaurants.

Today's papers reported that they'd cleared out El Bronx, which is also known as La Ele and adjoins Los Martires plaza, displacing thousands of people and cleaning out tons of material. Photos showed that what had been a hive of junk, shacks and human activity was transformed into an empty street which could have been anyplace.

I went down to see it. Instead, I found lines of riot-equipped police keeping people blocks away from El Bronx. "We don't want the people to go back," one told me.

Instead, El Bronx's denizens were sleeping on sidewalks and gathered in a crowd of hundreds in Los Martires Plaza. In the plaza, while I talked to some police officers, human wrecks from El Bronx limped past us. Nobody knew what would happen. Several cops had told me that El Bronx's residents had resettled a few blocks west. "They'll have to go somewhere," I predicted.

Suddenly and without warning, the police line moved aside and, yelling with excitement, the crowd of dirty, ragged, drug-addicted men and women raced to El Bronx's entrance. They limped and hobbled, dragging ragged, dirty clothing, and pushing carts filled with their worldly belongings. I followed. 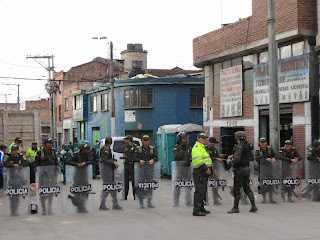 Beside and across from El Bronx's entrance stood lines of riot police. For once, El Bronx's residents ignored this gringo as he stood among them taking pictures. When I've passed by in the past and tried snapping a few shots of the melee of humanity in the street frantically buying and selling, the drug pushers in the entrance hobble out either offering their products or threatening violent punishment for photo taking. So, with cops all around and the El Bronx's residents distracted by the need for that next hit, I snapped away.

The background (According to news reports): Early Tuesday morning city employees arrived in El Bronx offering medical check-ups and food. Hundreds of Bronx residents got into their vans, and city workers cleared out the remaining people. While the street was unoccupied, the bulldozers entered and leveled everything, including shacks, workshops, small businesses, etc. Many Bronx residents lost the few belongings they had. Afterwards, the street was clean, but its structures were gone.

I've never been anyplace else like El Bronx, and the mass of depravityand human degeneration reminded me of one of those accounts of human sinks you read about far away and long ago. But here they were, men, women and children completely given up to addiction, who paid for their habits by stealing, trash-picking or any other way.

A cop approached me. "Where are you from." "The United States," I told him, "but I live here."

"And you're on bazuco?" he asked. That's the cheap and dirty form of cocaine which most street people are addicted to. He couldn't think of any other reason a person would come down here.

"No, just taking pictures," I said.

Another cop, who was also photographing, told me that El Bronx would not be the same. "They can come here and do their drugs, he said, but they can't rebuild their shacks. Instead, there'll be a half-dozen rehabilitation centers for them. Little by little, we'll reform them"

Hopefully that'll happen, altho it seems to me that most Bronx residents are beyond recovery. The administration of Mayor Gustavo Petro, a leftist who has tried to treat drug use as a health and social problem instead of a crime, has tried setting up treatment clinics near El Bronx and other addicts' havens, but they haven't received much acceptance. In any case, other cops predicted that El Bronx wouldn't change.

I entered only a few yards into the street, and then only with cops around. Several Bronx informed me that I'd soon lose my camera, so I retreated nearer the police line.

A middle-aged couple limped out. Despite being  drug-worn, they still looked friendly and warmhearted. They were Yudy and Cesar, and they'd frequented El Bronx since its beginning about seven years ago and said it was imported to have a drug 'tolerance area.'

"There are terrible things here, but also beautiful ones," they told me.

"What's a beautiful thing about El Bronx?" I asked. 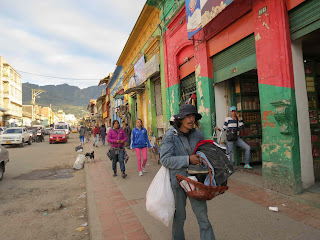 For one thing, they said, bazuco addicts like themselves could feel a self respect in El Bronx, where everybody was accepted. "One doesn't feel denigrated."

And El Bronx is a place of life and death.

"Children are born and grow up in El Bronx," they told me, altho many of them are addicts from childhood.

"And you can buy anthing here, even brand-name clothing, for cheaper than you can outside."

I pointed out that most of these items were undoubtedly stolen. But Cesar and Yudy didn't see much wrong with that.

"A fool who gets robbed deserves it."

"And the terrible things?" I asked, altho I'd read many accounts.

"The executions," they said, using the word ajusticiamientos, which suggests that the killers are doing justice. "They execute people for stealing, out here on the plaza."

I observed that killing someone for stealing seemed harsh. But they considered it justified.

"If one person steals, then others follow him," they pointed out. While much of what's bought and sold in El Bronx is stolen, those who control the street know that theft here will scare away customers.

Then, the couple described a kind of torture performed on miscreants inside El Bronx. As best I could understand it, the offender was made to sit in a bucket of water, and then an electrical cable was dropped into the water.

"Some survive, some don't," they said.

The couple also knew El Cartucho, El Bronx's predecessor, and they say El Cartucho was much worse.
As for Judy and Cesar, they work helping out in a nearby skid-row hotel. They'd like to get off of bazuco, and feel they are "80% of the way there."

That makes them exceptional in El Bronx, where most residents are beyond repair. Their employment has given them hope.

"It helps to have responsibility," they told me.

El Bronx sounds like a horrific place, altho also a sadly human one. Perhaps the city will clean it out, out of embarrasment of having this vice den so close to the city center and the historically important Plaza de los Martires. But then El Bronx's residents, who will always exist, will just move someplace else. 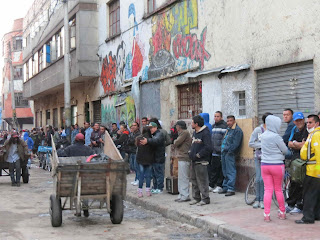 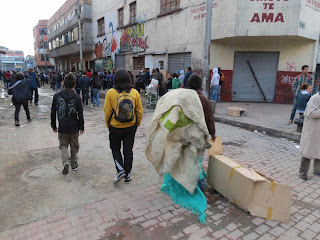 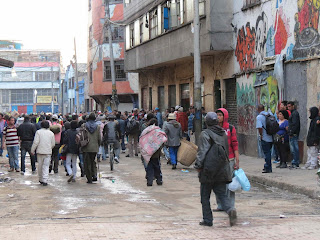 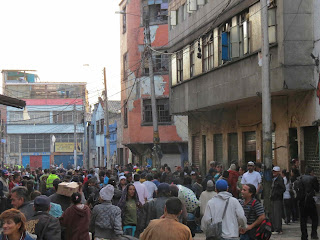 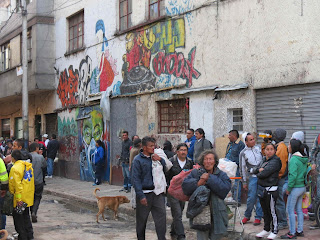 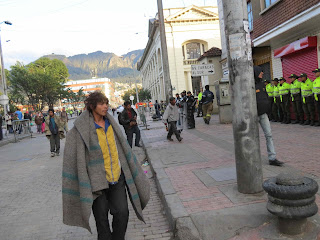 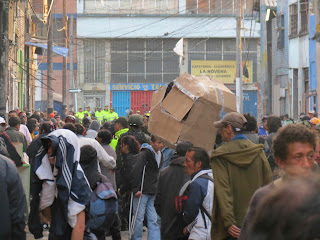 Very good post and one of your finest to date. A very insightful read. Great pictures and very well done on being so brave as to take your camera out in the first place, even with police near by. I am thankful that you told it as you saw it with little pandering to an agenda. It is the first post of yours that I am happy to share out to my social media followers.

Thanks for your comment Stuart and for sharing the post. It really is a surreal place, but also part of this city.

Great post Mike, I agree, one of the best I've read on the blog so far. You are doing very important work.

Thanks Mauricio and Elyssa. It is certainly a memorable place.