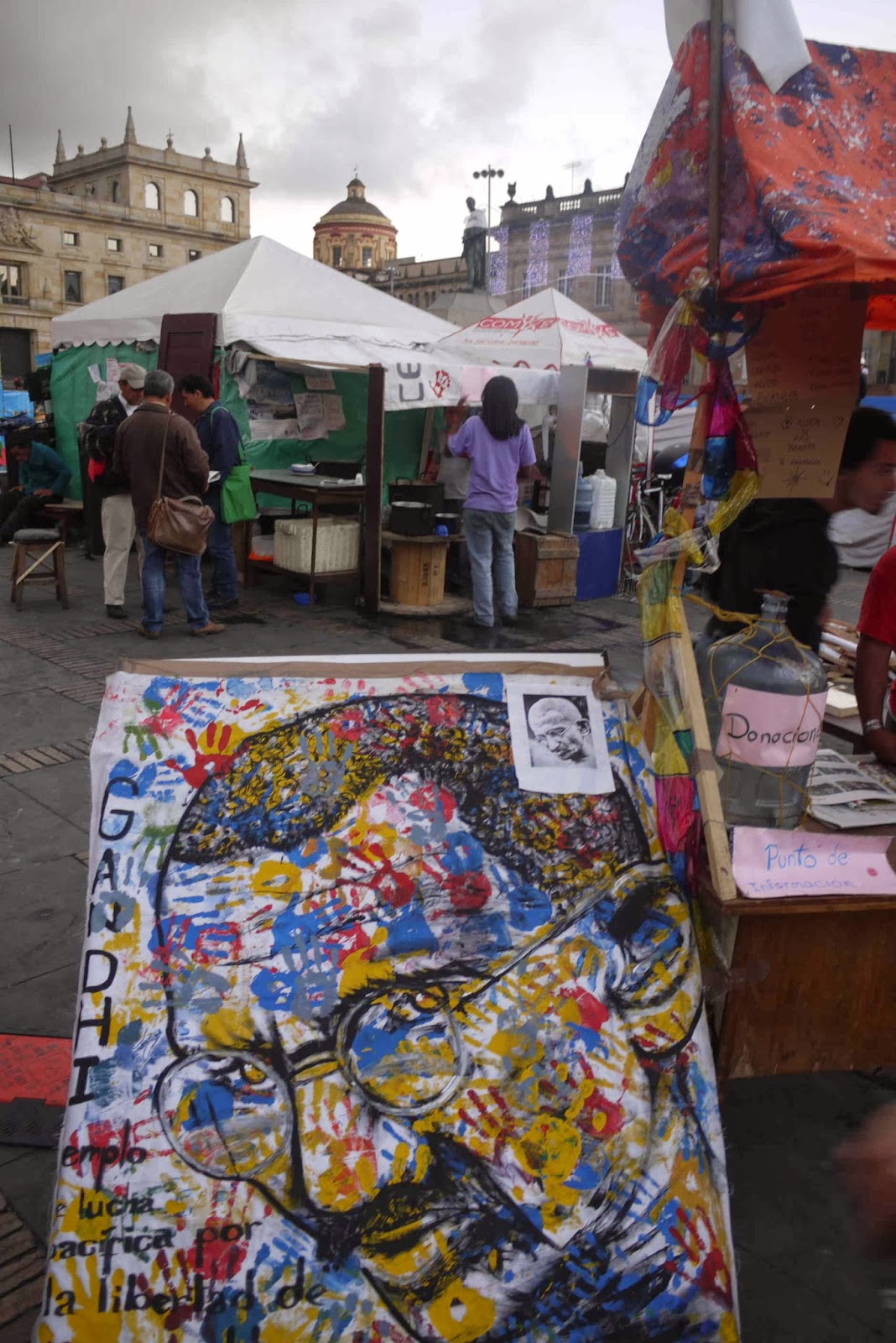 During the past several weeks, a set of disheveled tents have dominated the center of Plaza Bolivar. The tent village is ostensibly there to defend Bogotá Mayor Gustavo Petro, who is fighting an inspector general ruling that he be ousted for bungling a reorganization of the the city's garbage collection service.

Yet, strangely, during an hour's visit the other night, participants told me little about Petro, and much of that ambiguous.

The first person I spoke too was a middle-aged man attending the camp's literature table, where visitors also signed a petition backing Petro. But the man didn't want to talk about Petro - or even Bogotá. When I told him that I was from the United States, he immediately challenged me about North Korea.

North Korea is not one of the world's last totalitarian regimes, whose leaders live in luxury, build ski lifts and play with nuclear bombs while their people endure hunger and waste away in forced labor camps. No, North Korea's people live well, protected by their government from the evil West's consumerism and ambition.

How did he know this? He claimed to have lived in the world's most isolated state for three years. Foreign visitors to the North are shown only what the government wants them to see, and evidently the People's Democratic Republic of Korea's propaganda was very effective on this true believer.

But if I doubted him, the man offered me yet more proof: It was impossible that the North Korean's lived badly, because they would have overthrown their dictators long ago. Sure. With empty stomachs and guns pointed at them.

Inside the circle of about 20 bedraggled tents, groups of people were sitting around a vigorous campfire of logs and two-by-fours. Several people were eating the free bean soup the Petristas had prepared. A few had laptops and were using the city's free wi-fi, a Petro initiative. I talked to a youngish French woman who looked like she'd stepped out of an alt-music party. She certainly seemed like a strong prospect to be a passionate Petro supporter. Perhaps she'd rushed across the Atlantic to back the embattled mayor, who has tried to fashion himself into a martyr for democracy.


So, what did she think about Petro?

She didn't think much of him either way, she said. In fact, as an anarchist, she didn't approve of anybody holding power.

"I'm really here for the encampment," she said. It was like a Bogotá version of Occupy, but with a more specific goal.

Her friend, a Bogotá street artist, was no Petro fanatic, either. He had brought with him bags of colored plasterine to make sculptures as well as chalk. But it was already night - too late to earn a few coins by drawing on the plaza.

"I came here to do something creative," he explained.

I also met a white-haired Jewish man, who is a notable sight in La Candelaria as the only yamulka-wearing resident. Neither did this man seem convinced of Petro's cause. Instead, he asked me for my opinion about the mayor's predicament. I told him that the ouster seemed somewhat anti-democractic, as well as very severe compared to the mayor's offense. After all, Samuel Moreno, Petro's predecessor in City Hall, who is awaiting trial on multiple corruption charges, was banned from politics for fewer years. (Still, by running for office, Petro did implicitly accept the ground rules.)

"I agree with you," the Jewish man commented, and sat down again by the fire.

Lastly, I talked to an old man, evidently homeless, who was enjoying a bowl of the Petrista's free soup. The man told me that he survived by "buying and selling things," probably scavenged from the city's sidwalks. He expressed a firm work-ethic: "He who doesn't work, doesn't eat," he said, spooning in more bean soup.

Did this man support the mayor? He appeared not to have thot deeply about the city's political drama, but he finally allowed that he he wanted the mayor to stay in office. And why was that? 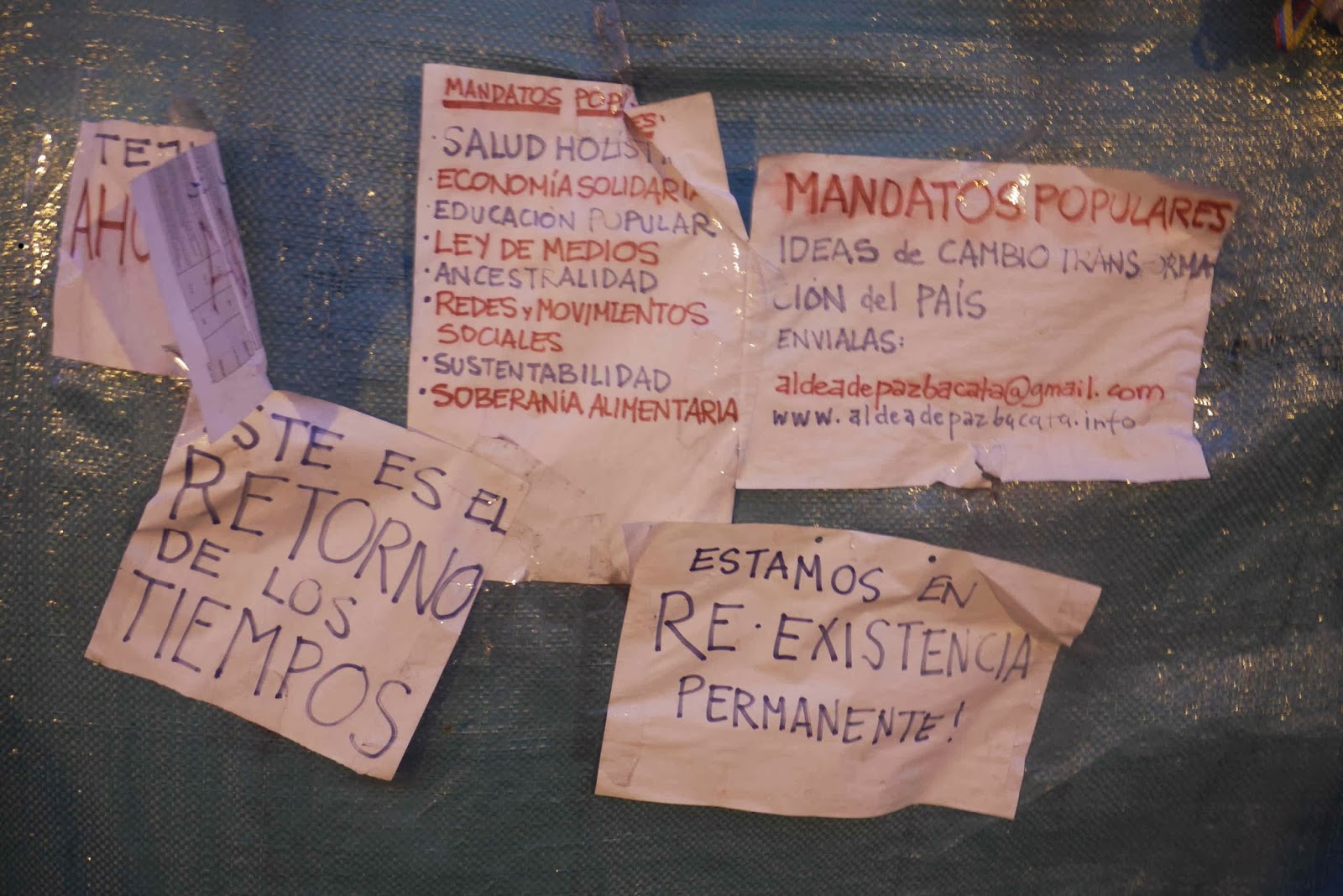 "Petro's a man of the people," the old man told me.

What makes a guerrilla-turned-politician qualify as a man-of-the-people isn't clear to me. Nor is it clear to me what this random mix of people could possibly do to stop Petro's ouster.

For a clearer, more ideological response, perhaps I should have walked over to the plaza's western side, to the other tents labeled M-19, Petro's one-time guerrilla group.