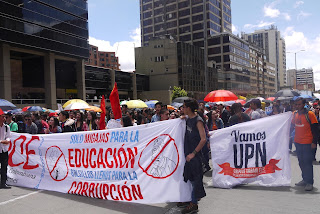 For reasons we could debate, Latin American teachers' unions appear to often be wildly, inordinately far-left. Perhaps it's the mixture of a truly proletarian labor force with a level of intellectualism not often found among mine or factory workers. 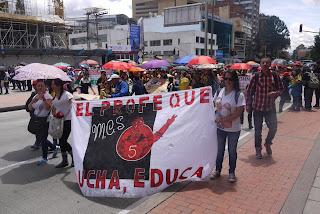 One of the most surreal incidents I've experienced in my years in Latin America was an interview with a teachers' union official in La Paz, Bolivia. The woman had just returned from a union conference, and described to me the debates there: It was the Trotskyites vs. the Stalinists. (She was one of the Trotskyites.)

I left the interview wondering which decade I was in.

I felt the same way today when I passed these red communist flags carried by striking teachers. The teachers' demands are pretty standard: higher wages and benefits. Those won't require a revolution, which isn't likely to occur anytime soon, in any case.