When it comes to animal rights, Colombia seems to have a split personality: Many Colombians love animals. I see people feeding and helping pigeons on city plazas, I know ladies here in La Candelaria who populate their houses with rescued street dogs, and canine companions seem really popular and well-loved. Colombians' love for animals is so strong, in fact, that demonstrations and protest marchers for animal rights are more common than those for human rights. Yet, at the same time, Colombia is a conservative society with lots of poverty. So, bullfighting and cockfighting are popular here among some groups, as are rural practices like coleo and corraleja. Those four practices are actually protected by law, as 'tradition.' And horse-drawn carts called zorras are a common sight on Bogotá streets, driven by poor people who often scavange and resell trash for a living. Some of those horses are treated well, but others are overworked and underfed.

Today's demonstrators included demands for a prohibition against circuses, bullfighting and the urban horsecarts, as well as representatives from an 'animalist' political party and people demanding 'animal equality' and an end to specieism.

But animal equality looked a long way off, even amongst those in the march, who included men on horseback, people walking dogs on leashes and with muzzles and trained dancing dogs. 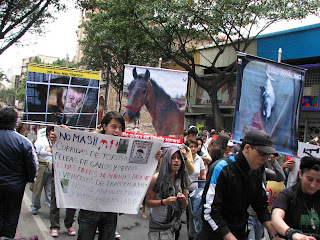 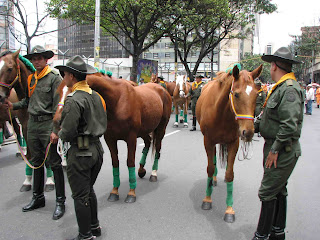 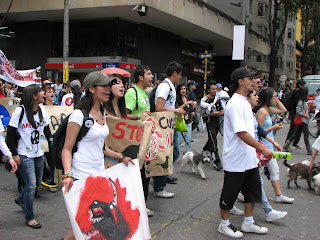 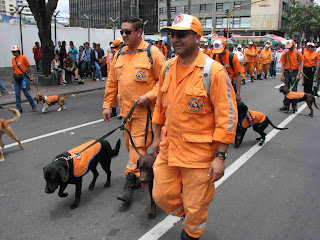 A few four-legged friends in Bogotá.