You might notice in La Candelaria and a lot of addresses which look like this one: several numbers alongside each other, one or more of them crossed out.

It's not that someone doesn't know math. Or that the houses have picked up and moved. Or some conspiracy of greedy signmakers to sell more.

Whichever brilliant city agency which is in charge of street numerature just renumbered La Candelaria. The bad old scheme, in which the streets were named, very confusingly, Calle 12, Calle 13, Calle 14 and so on, has been replaced by a new and improved numeration which goes Calle 12, Calle 12B, Calle 12C, Calle 12D and then Calle 16. Isn't that much clearer now?

Perhaps I shouldn't be so sarcastic. Apparently down west of here the street numbers were out of cync, and this is resolved by creating multiple Calle 12s in La Candelaria. So, some other Bogotá barrio is benefiting from the confusion here in La Candelaria.

When the city makes these numbering changes, property owners often leave up the old numbers, which they refer to as the 'dirección antigua' (old address). It's an important thing to be aware of when navigating in this city. 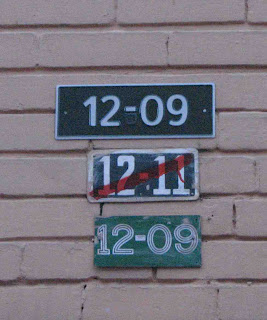