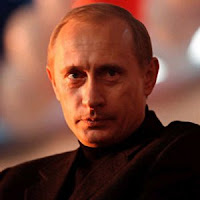 Now that it looks like Russian strongman Vladimir Putin will have another (and another, and another...) term at the head of Russia, this historical tidbit seems worth noting.

Putin may have gotten his start with a bit of help from the Cali cocaine cartel.

Back in the mid-1990s when Putin was deputy mayor of the city of the city of St. Petersburg, he was on the advisory board of a company named SPAG, meant to encourage foreign investment in Russian real estate.

According to United States and European prosecutors at the time, SPAG was involved in laundering money for the Cali cartel. This story I found doesn't say whether the prosecutions against company officials (Putin was never charged with anything) were succesful.

The 1990s were a time in Russia of wild corruption and savage, unhindered capitalism and in Colombia of powerful drug cartels, so it's no surprise that the two hooked up.

The Colombia-Russia cocaine connection continues, as occasional news reports point out. And, some of the deals still involve important Russian businessmen.