Raising the Roof on 26th St. 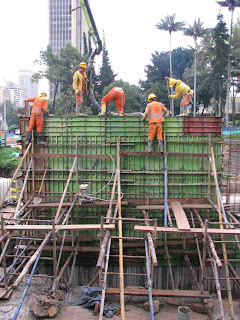 The structure will, I'm told, be covered with gardens, connecting the Parque de la Independencia on the north side of Calle 26 with the National Library and Museum of Modern Art on the street's south side. Below it will run a TransMilenio express bus line toward the airport.

The project has encountered many bumps along the way. The contract was first issued to a company owned by the Nule brothers, who are now in prison facing corruption charges. Mayor Samuel Moreno and his brother are also in prison over the same scandal.

But now the project is advancing, albeit slowly, and the TransMilenio line is supposed to be operating by early next year - altho they'll still be two kilometers and three stations short of El Dorado Airport.

Neighbors of Independence Park have also objected to the project, because of the number of trees cut down during the work.

The completed project will be a nice contribution to central Bogota, particularly once the city and universities expand cultural activities in the blocks south of 26th, which only a decade ago were a red light district. However, one can question whether the massive investment of this project could have been spent more effectively by, perhaps, buying up some empty lots in a poor neighborhood and turning them into a city park.