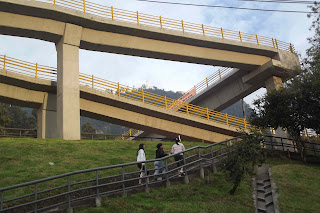 As part of the eternally-unfinished TransMillenio extention to the airport, the city built several of these elegant pedestrian bridges over 26th Street/Carrera 3a above Parque de la Independencia, near the Universidad Jorge Tadeo. (The area has no distinct name).

Anyway, the bridges strike me as elegant additions to the neighborhood, even if they don't seem to be heavily used - yet. 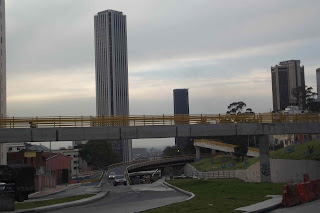 Meanwhile, the TransMilenio line, already more than two years behind schedule, is still far from completed. The replacement of Carrera Septima's bridge over 26th St. received lots of attention and was completed efficiently months ago. But the expansion of the Carrear Quarta bridge has received much less attention and seems to be dragging. That job is necessary to extend the 26th St. TransMilenio line to La Candelaria.

Meanwhile, construction has not even started on the last two kilometers of the line to the airport. That piece is supposed to be completed next year, altho a connector shuttle is running. 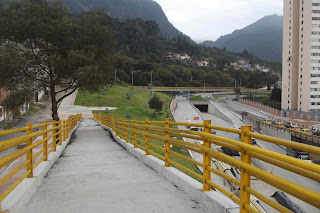 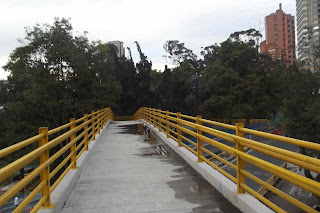 They won't be heavily used, or used at all, because they're inherently unsafe. Nobody in Bogota would voluntarily walk somewhere they could be trapped and robbed.

Heck, nobody in a US city would use a pedestrian walkway like that, for the same reason, so it's not a Colombian thing.