Another Bite Out of Bogotá's Hills


As we all know, the forests of Bogotá's Eastern Hills are inviolate. A wildland providing fresh air and water, recreation and storm protection to all the people of Bogotá - which is why the hills and their forests belong to everybody.

Or, at least that's what we thought.

But individuals and institutions continue taking pieces of the hills.

Recently, there were headlines about an illegal road built in protected forests in north Bogotá. At last word, environmental officials said they couldn't remove the road, even tho it would likely spur homebuilding in the area. 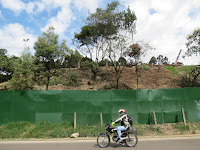 Now, in central Bogotá, the Universidad Externado is taking its own bite out of Bogotá's hills.

The university has already cleared land above La Circunvular to build two eight-story towers on the hillside above La Candelaria. The legal status of this area is unclear, according to press reports, because of contradictory municipal resolutions and court rulings.

But what does seem clear is that the forests are a resource benefiting millions of Bogotanos, while these towers will be used by a privileged few. And, you can bet that the towers' possible impacts, on hillside stability, water quality, erosion and traffic in the area will be born not by the university, but by the city in general.

It also seems inevitable to me that, unless someone quite literally draws a line on the hillside protecting the forests, this construction will be the beginning of further buildings, leapfrogging each other up the hillside.


And the project's nearly 500 parking spaces constitute a gut punch to hopes for promoting sustainable transit in central Bogotá.
﻿
﻿

Certainly, this is not the universities' first invasion of hillside areas which many consider protected. Several years ago, Los Andes University built a swimming pool and a soccer field in the hills. And La Universidad Distrital has buildings even higher than La Externado's construction site. But La Distrital is a public university, it's been there for many years, and its students arrive mainly by foot or bus, reducing local impacts. And anyway, two wrongs don't make a right.

"As far as I know, they just have to replace the trees they cut," he said. "That's my opinion as mayor."

Guerrero added that, as a La Candelaria resident, "I'd prefer that the forests be healthy. But we're in a market of free competition, and as long as they meet the norms, nothing can be done."

I'd like to ask the mayor if he believes there's any limit to construction on the hillside. As a local official and resident, doesn't he feel an obligation to fight for the hills, no matter what the laws say? Or, should the trees fight the bulldozers on their own, in 'free competition'?

The battle against the project is being led by Jose Baquero, a resident of the impoverished Los Laches neighborhood. He told ADN newspaper that the university had cut down 3,600 trees.

"How can they permit this?" he asked.

His is a David vs. Goliath battle, a real Quijotesque effort of a single, humble man against one of the city's more powerful institutions.


Has anybody thot about pedestrians? How will students cross this narrow, winding road with only one narrow sidewalk with a stream of cars racing by?

The city just finished a long, expensive project building retaining walls to prevent the hills from sliding down onto La Circunvular. Has anybody calculated the impact of two towers and lots more traffic on the hills' dynamics? Or will the soil movements become another expense to be born by city taxpayers?

Today, La Circunvular is a peaceful road bordered by trees and fields. But will thousands of wealthy students be followed by bars, fast food restaurants and chain stores?

What will an additional 1,000 cars a day do to La Circunvular and narrow streets of La Candelaria?

Will new buildings leapfrog each other up the hill until the Virgin de Guadalupe is walled in?


University expansion is legitimate and good. And it's good to have more activity in the city center. But the university had alternatives, such as building on the sites of parking lots near the university and below La Circunvular.


This is yet another glaring example of the need for public hearings before major planning decisions. The Eastern Hills are a public resource. Every single resident of Bogotá has an interest in their preservation, if only to preserve the city's green backdrop and flood protection.

Don't city officials believe that Bogotanos deserve an opportunity to comment on a project like this one?

Bogotá's Eastern Hills - So Near, Yet So Far Away

A Hero for Bogotá's Hills

Miguel,I can almost guarantee you, that many officials, including Mayor Guerrero Ramos are very deep in to the big pockets of some of these institutions. Very very sad Mike.
My respect for Mr Baquero and, his brave fight, but, as you say, it's a David and Goliath struggle.
I remember these beautiful hills as a boy scout long long time ago.
Excellent post Mike.

Thanks for your comment Mauricio. But I wouldn't jump to any conclusions about anybody being on anybody's pay, altho Colombia certainly does have a corruption problem.

The local mayor may simply believe that the project is legal and that there's no way he could stop it, even if he tried. However, his seeming apathy about this and chain stores in the historical center makes me wonder about his commitment to preserve the neighborhood.