Coca leaf products - the legal kind - seem to be proliferating in La Candelaria. I'm not sure whether this is due to more interest, more tourists, or because stores have become less wary about products associated with but totally different from cocaine.

The most recent addition is the small Nasa Tul Coca Café on Calle 12D just above Carrera 3, where almost everything on sale contains coca leaf. They've got coca leaves, crackers, medicine - even rum and coca leaves with chocolate (another native Colombian product).

The store is run by a young couple, Yudith and Juan, who is indigenous and a native of Cauca Department, which is also the source of the café's coca leaf. They work with Coca Nasa, which Juan said is the oldest and biggest coca leaf product maker in Colombia.

Coca Nasa has in the past made other products, such as coca wine and a soft drink. But they ran into problems, at least in part due to the leaf's continuing stigmatization. That's despite - or maybe because of - the makers' claims that coca leaf can treat many of your ills, ranging from rheumatism and diabetes to weariness and PMS. I wouldn't count on that. But Andean indigenous people have chewed coca leaves for millenia with no bad effects except yellow teeth and lots of swear swear it helps with altitude sickness.

I've drunk coca tea and chewed leaves quite a few times, with no noticeable effects, either good or bad. But, who can say? Perhaps I'd be worse off if I'd never tried them.

Coca Nasa waged a long legal battle with the Coca Cola Company for the right to use the word 'coca', Juan said. And - amazingly - Coca Nasa ultimately won, according to Juan. However, soon after that the company encountered obstacles in getting its products into large businesses like supermarkets. Juan blames that on Coca Cola, but I recall a decree being issued prohibiting the selling of coca leaf products outside of indigenous territories. The decree came out, no doubt totally coincidentally, just a few days before U.S. Pres. George W. H. Bush visited Bogotá.

Juan also told me that Coca Nasa was behind the lawsuit which got the annoying, and even slanderous, 'La Mata que Mata,' ad removed from radio and television. The notorious ad featured the cloying voice of a little girl, who implored Colombians not to cultivate coca leaf, 'La mata que mata' - 'The plant that kills.' The ad portrayed all growers of coca leaf, whether they went into tea or cocaine, as killers.

Paradoxically, Coca Cola reportedly buys tons of Bolivian coca leaves, which it uses in Coca Cola, after removing the cocaine alkaloid. One of the world's best-known corporations can export coca leaves to the U.S. in contravention of United Nations rules, but Juan said that when Coca Nasa sent boxes of coca tea to Chicago they disappeared in the mail. Figure that one out.

Bogotá's prohibition against coca leaf sales has been enforced only irregularly, as demonstrated by the many shops in La Candelaria and other places selling coca leaf products. Juan said that INVIMA, Colombia's equivalent of the U.S. Food and Drug Administration, has refused to register products made from coca leaves. However, he said they do have indigenous registries, which he said are the legal equivalent.

In any case, Juan pointed out that "all of Colombia is indigenous territory. The Muiscas lived here" in what is now Bogotá (and some still do).

If coca leaf is ever to become an industry, it will have to overcome one big obstacle: The United Nations list of controlled substances, which includes cocaine, marijuana, heroin - and coca leaves. 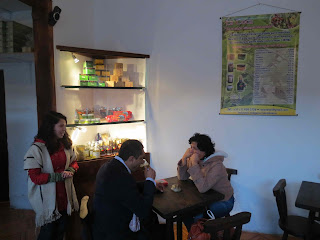 The Colombian government, tired of the nation being equated with cocaine - even tho Colombia continues to produce most of the world's supply of the drug - perhaps would like to discourage all things coca leaf. But coca leaves and coca leaf products, grown sustainably, could turn into a valuable export for Colombia and the whole Andean region.

Bolivian Pres. Evo Morales, an Aymara Indian and one-time coca leaf farmer who still heads Bolivia's coca-growers' association, recently withdrew his country from the United Nations drug convention in protest, and then reentered after Bolivia was excluded from the coca leaf prohibition. But the prohibition still applies to Colombia, Ecuador, Peru and the rest of the world, even tho coca leaves cannot be equated to cocaine.

Juan made a parallel between coca leaves and grapes.

"You've eaten lots of grapes, haven't you?" he asked. "Have they ever made you drunk?"

In any case, he said,

"We want to show the positive side of Colombia culture," he said, "the

The coca leaf products industry has also had internal problems. Juan said that one company, despite an indigenous name, does not provide benefits to native people and that its leaves "are of dubious origin." Coca Nasa has sued them, he said.

You can also find coca tea and other coca leaf products in La Candelaria at:

- The cooperative restaurant/grocery/hostel on Calle 15 by the corner of Carrera 3.

- Quinua and Amarantho Restaurant on 11th St. just above Carrera 3.

The Benefits of Coca Leaves

A friend brought me Coca nasa for asthma. It works beatifully. I am desperate to get more as i am running out. I guess, ill have to go to Colombia.

That's really interesting, and the first time I've heard of coca leaves helping with asthma. It's absurd that you can't mail order the leaves (or plant a bush of your own) since the drug can only be made with an industrial scale operation.

By the way, Beatrice, did you make coca tea with the leaves? Chew them? I'm curious.