The Guinea Pig Races are Back! 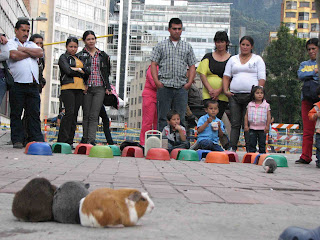 The guinea pig races, once common on Avenida Jimenez, disappeared for a while. Perhaps the guy who puts them on - and there can't be many people with guinea pigs and the skills to train them - had taken his rodents on the road for a while. We encountered the races during today's bike tour. 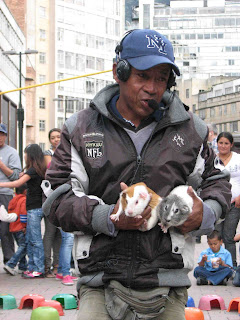 "These aren't rats!" he says. Throughout the Andean region, the critters are called cuys, and make a popular food. You can order up cuy in Colombia's Nariño province.

What fun! Perhaps I should introduce them to the UK!