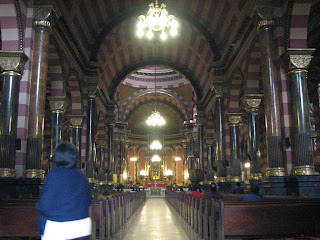 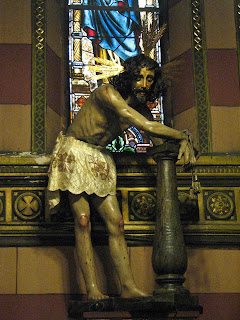 For many years, Las Nieves Church on Seventh Ave. and 20th St. sat empty and abandoned. Homeless people slept in its doorway and defecated by its gate. A real tragedy for this handsome, century-old church, full of wonderful carvings, beautiful stained glass and elegant arches and columns.

A church was first built here in 1585, but burned down in 1594 and was rebuilt, making it one of Bogotá's oldest churches. Back then, Las Nieves was the furthest north sector of the city. The church's red and white-striped exterior has a Roman-Byzantine architecture; the interior looks Moorish to me. 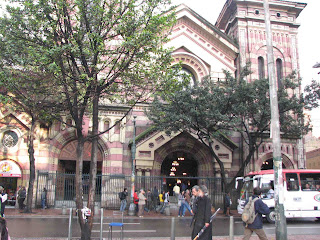 At first, Las Nieves neighborhood, whose name means 'the snows,' was known for its religiosity. In later periods, the area became known was as the neighborhood of the craftsmen, and then as a rough neighborhood, containing one of the city's red-light districts. It was, and still is, famed for its concentration of bakeries, including La Florida and El Cometa.

In recent years, universities including the Jorge Tadeo and La Central have given Las Nieves a new atmosphere, as have more cultural institutions. La Tadeo is now finishing a big new classroom building and La Central is renovating the handsome art-deco Teatro Faenza. The city also plans to expand Independence Park and turn the low-brow Pasteur mall into a cultural center, giving the neighborhood a promising future.

Anyway, back to the church: Las Nieves reopened last December. Today, a Monday, dozens of believers filled the church, kneeling before the sculptures of Jesus or praying in the pews. A fried chicken restaurant still functions in the church's north side, so that capitalism finances faith.

The church is now being repaired and restored, as its budget permits.


Las Nieves enthralled me with its craftsmanship which is impressive without being opulent.

I love this church too, however this structure is less than 80 years old. According to wikipedia, they had to demolish the church after the 1917 earthquake and this one was built in the 1920s. It's still a great building.

Thanks for the correction. You're correct, as is explained here.