Almost three decades ago, Alfonso set some aquariums on a ledge on the corner of Calle 13 between Carreras 8 and 9. He's been there ever since, pretty much every day, selling goldies, bailarines, guppies and other varieties. 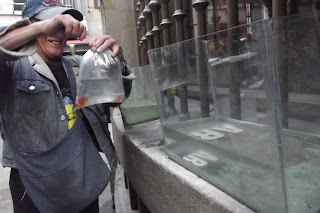 Along with his captive product, Alfonso also has a captive market, since there are no pet shops nearby. If I understood him correctly, Alfonso doesn't have any fish of his own. But he has his sources. When a client asks for some exotic species, Alfonso gets it for them. 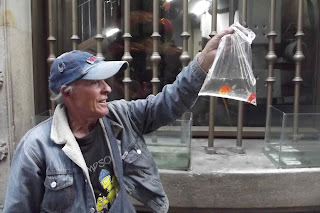 Over the years, he's seen the sale of other animals, such as turtles, banned for environmental reasons. But he can still sell fish.
Alfonso sets up beside a notary's office and at the northern entrance to the traditional but sadly run-down Pasaje Fernandez. He got the idea thanks to some friends, who sold their fish on Plaza Bolivar. But those men have stopped selling, and one has died. How long will Alfonso, who is over 60,
keep offering his fish amidst downtown's high-rise buldings and noisy traffic?  When he quits, will someone else offer a bit of biodiversity amidst the concrete? 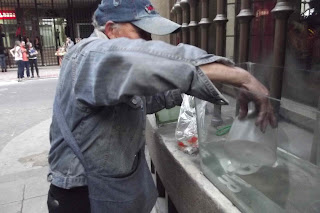