It's unfortunate that the trash isn't all white, or else Colombia's capital city could be expecting a white Christmas.

That's thanks to the huge piles of garbage piling up on sidewalks and median strips and spilling into streets and parks.

City officials say this is only a temporary problem resulting from the city's transition from one trash collection system to a new one. Let's hope that's true. But, it already seems clear that the optimistic goal of separating and recycling large amounts of Bogotá's trash isn't going to happen anytime soon. 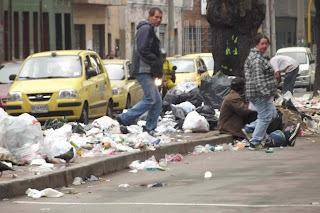 The city government has made a list of a half dozen cities across the world which have succesfully introduced recycling. But all but two of those cities are in wealthy, developed nations, where levels of education and rule-following are much higher. One example is the city of Pune, India. But, from what I read, in contrast to Bogotá it sounds like all of Pune's garbage is collected together and then separated in large facilities. A small number of households do separate out their recyclables. But these households have personal relationships with the scavengers, or trash pickers, who go door-to-door collecting the useable material.

The other developing-world example, La Pintana, Chile, is only a communa, or district in Santiago. And there they're collecting only organic waste.
My interpretation is that Mayor Petro, once a leader of the M-19 guerrilla group, still remains a revolutionary at heart and believed that he could revolutinize Bogotá's trash collection system with a single decree. But these changes, unfortunately, must be implemented incrementally, not in one fell swoop.

For the good of the environment and the city Bogotá needs to implement recycling. After all, the landfill, Doña Juana, is running out of space. But it will require methodical changes. They could start with the low-hanging fruit: supermarkets, traditional markets, city agencies like the parks department, office buildings and maybe apartment buildings, which would receive utilities discounts for separating out organics. That, hopefully, would start a cultural change which would then spread across the city.

But there's a more immediate measure the city could take to reduce waste: reducing the use of disposable materials. The most obvious example are plastic bags, which are generally used only once and occupy a huge volume in landfills. Across the world cities and even the country of Ireland have dramatically reduced plastic bag usage by placing a small tax, or disposal fee, on each bag used. 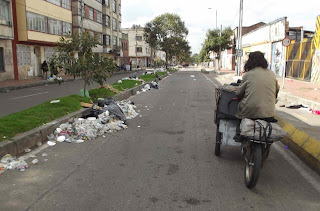 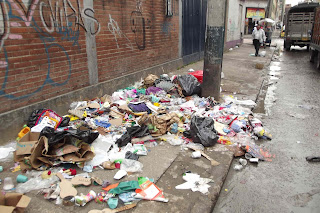 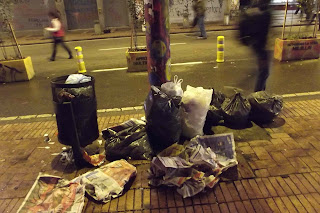 Dear Miguel, this is so sad, I don't remember Bogota looking so dirty and abandoned when i was living there, definitely my city has changed for worst, at least in this sense.
good post do, very strong shots.