They're fat, dirty, disrespectful and almost everywhere. But unlike many other cities, where they're treated as flying rats, Bogotá's pigeons are pets, companions - even objects of veneration. 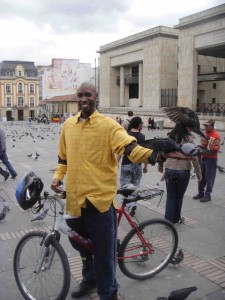 In public spaces like the plazas Bolivar and San Victorino, the pigeons are even an economic force. Vendors sell bags of corn and rice for pigeon feeding. People sprinkle the grains on their arms, heads and shoulders, and, decorated with pigeons, pose for the plaza photographers. The pigeons carry so much weight, in fact, that when the Cathedral placed spikes on its balconies to ward the birds off, causing hundreds of avian crucifictions, public pressure forced the priest to have the spikes removed. Wander under a balcony or tree anywhere in the city and you might be the target of an unwanted deposit from the sky. Popular culture calls such gifts signs of good fortune, which might make bogotanos the luckiest people in the world.

What so much affection in Colombians for these flying scavengers? Perhaps it has something to do with the animals' scientific name: columbidae. 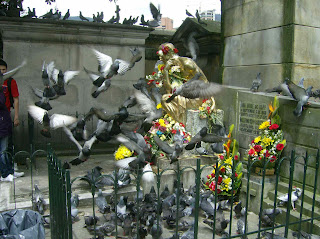 In Bogotá's Central Cemetery, pigeons flock to eat grains scattered around the statue of Leo Siegfried Kopp, the founder of the Bavaria beer brewery, who is revered as a saint by many.

And for those who persist in calling them 'rats with wings,' here are some shots of a mommy pigeon feeding her baby (but not little) chick on the Plaza de Toros. I spotted the baby pigeon the other day. It'd apparently fallen from the nest, and I was afraid that it was doomed. But mommy is there, doing her duty.