A Down Payment on Makled

Venezuela just handed Joaquin Perez, who allegedly handled the FARC guerrillas' relations with Europe, over to Colombian officials. (Perez's defenders say he was just a journalist and critic of Colombian policies. But Colombian officials say they have proof that Perez visited FARC camps and worked closely with the guerrilla group.) 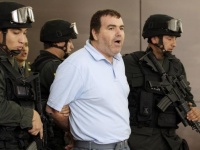 This undoubtedly would not have happened without Pres. Santos' promise to extradite accused Venezuelan drug trafficker and murderer Walid Makled to Venezuela rather than the United States, which wants him too.

Clearly, for Colombia, it's crucial to have a cooperative Venezuela arresting Colombian outlaws and sending them home for trial. So, Santos' bargain with the devil turned 'best friend' makes sense.

But Perez's arrest might make less sense in case the Colombian government actually wants to negotiate with the FARC, whose backs are already against the wall. In that case, whom will the Colombian government talk to, if all of the FARC's 'ambassadors' are either in prison or under ground?
By Mike Ceaser of Bogotá Bike Tours
Publicado por Miguel en 8:37 PM