Colombia became one of the more progressive nations in Latin America for abortion rights thanks to a 2006 high court decision legalizing the practice in certain cases. But now, a Conservative Party senator wants to set the clock back - and condemn more girls and women to suffering and even death - by banning abortion in all cases.

The legislation appears unlikely to pass, since most Colombians appear to support the current exceptions, which depenalize abortion when a pregnancy results from rape or incenst, threatens a woman's life or the fetus is severely deformed. The government is even considering including the day-after pill in public health programs, altho its supporters don't consider it abortive.

The high court depenalized abortion in certain cases because dangerous pregnancies and illegal abortions were killing many women and girls - as they still do. According to a 2005 study, before abortion was legalized, 23% of Colombian women reported having had an abortion and illicit abortions caused 16% of maternal deaths.

Even since the court decision, only a few hundred women have taken advantage of each of the legal exceptions, in a nation of 45 million people. That's probably due to lack of education, the social stigma against abortion in a highly Catholic nation and resistance by doctors and hospitals to performing abortions, even when a woman has a legal right to the procedure. The low numbers also suggest that the procedure is not being abused, but rather that many women are being denied their right to the procedure and either carrying  dangerous pregnancies to term or undergoing illicit abortions.
﻿﻿

There is even an area of Bogotá's Teusaquillo neighborhood that's known for illegal abortions. Ironically, these clinics, which advertise services for pregnant women, surround a venerable Catholic church. 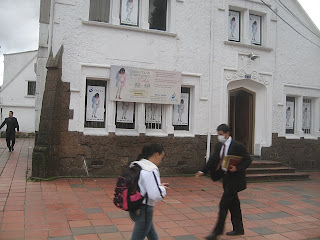 Before the 2006 court decision, I visited several of these clinics with a friend who told the doctors that she needed an abortion. Each clinic offered her an abortion, for different costs. When my friend expressed concern about dangers to her health, one (apparent) doctor reassured her that 'Lots of women come here and have one abortion after another, with no problems.' In fact, my friend had had an abortion in one of those clinics, with no complications. But that's not always true. In one case, a woman having an abortion in a clinic near the church started hemorraging. The clinic's staff were afraid they'd get themselves in trouble if they took her to a hospital, and so they just called her family to come pick her up. But by the time her relatives arrived, the woman had died.


That's what happened and continues happening in Colombia, where law and reality often do not coincide.

In a nation in which children start having sex in their early teens and where machismo and alcohol mean lots of unintended pregnancies, abortions will continue happening whether they're permitted or not. Right to life arguments are principled and deserve respect, altho I disagree with them. But abortion bans prevent few abortions, while pushing many girls and women into dangerous illegal clinics. Lgalized abortion can hopefully be regulated and made safe. But when abortion (or prostituion or drug dealing) is prohibited it goes on anyway, just clandestine and unregulated.

Here's an entry about abortion protesters.