After five years in ruins, city workers are preparing to demolish the bombed building in Bogotá's Santa Fe neighborhood. For most of the neighbors, the ruins are a reminder of a tragedy which might also have killed them.
At 12:15 p.m. on April 15, 2006, a second floor room of an apartment building in the middle of Santa Fe, a gritty neighborhood known as the site of Bogotá's principal red light district, exploded. The explosion killed five people and wounded ten and devastated the building. The first reports said that cooking gas cannisters had ignited. However, investigators then reported finding traces of bomb-making chemicals. They concluded that several university students working with the FARC guerrillas had been building a bomb, or practicing bomb-making, when something went very wrong for them and the neighbors.

Government policy here is to rebuild things destroyed by terrorism. However, I understood that when authorities investigated further they discovered that the building's owners had bought the building with drug money . and so it remained in ruins, a reminder.


That was the official version. When I passed by today, a group was holding a commemoration for Luis Alejandro Concha, a philosophy student killed in the explosion. Those at the event, who included members of Movice, the National Movement of Victims of Crimes by the State, and the young man's parents, claimed that the government had planted the bomb in order to kill the young man. 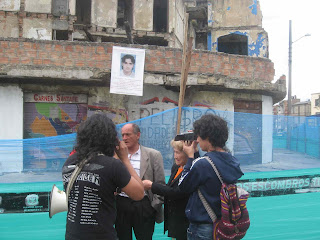 The parents tell their story.

Colombia's government and its institutions have certainly been responsible for many illegal killings, as Colombian and international courts have ruled repeatedly. However, I strongly doubt that this was one of them. After all, if the government had considered this philosophy student some sort of threat and wanted him out of the way and been willing to commit murder, they could have found easier ways to do it than blowing up a whole building with occupants inside. Also, such sorts of government crimes do tend to come to light, and I've heard of no evidence that the government was behind this one. 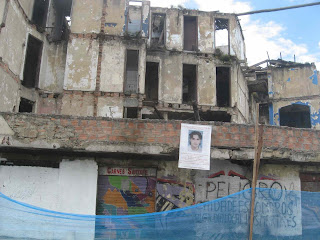 For scenes of kids scavenging from the building and perhaps living in it, look here.