The box man of La Jimenez 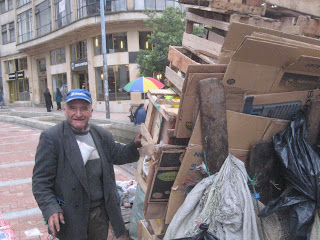 This man is a common sight on La Candelaria's La Jimenez Ave. amongst the strolling students, tourists and office workers, building impressive towers of cardboard and wooden boxes which he pushes on a -- cart. Toothless, ageing and dirty, he looks like yet another one of Bogotá's countless street people - probably mentally ill and homeless. Another victim of circumstances of a society with limited opportunities - particularly for older people. 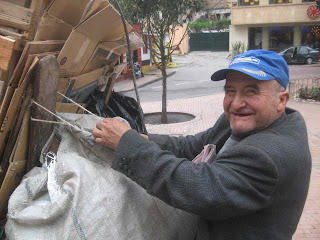 And then one day I talked to him.

At 65, he's worked collecting and selling, originally fruits and vegetables and now the boxes for decades. Thru this business, he said, he's raised nine children, some of whom have their own businesses or office jobs and sound like they've moved into the middle class,  and bought a house - quite an accomplishment in a nation in which few people, particularly the poor, own homes.

"If he's accomplished all of this, why does he continue?"

The guy's not ready to rest, either. What sorts of things could he import from the United States," he asked me. He's enthusiastic about the opportunities which the proposed U.S.-Colombia Free Trade Agreement could open up for him. "Let's do business," he said. "I've got initiative!"

But he didn't want his name published, and was pleased that this blog was written in English. After all, people might become jealous or something.

The guy is a wheeler dealer. He's the arbitrater of the market value of cardboard and wooden boxes along Jimenez Ave., paying the homeless people who scavenge a few hundred pesos, depending on their quality and the state of the economy, and then selling the boxes for perhaps twice as much in the Santa Fe neighborhood. Most likely, the street's increasingly upscale restaurants and hotels want him out of here: he looks shabby, after all, and si generally surrounded by trash. 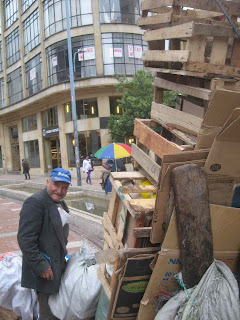 But this guy has more spirit, industriousness and initiative than most people in fancy offices. I can't help feeling that if he'd been born in different circumstances with different opportunities, he'd be a millionare. But not necessarily any happier.

"That'd mean lots of hassles," he said when I mentioned the possibility of riches. "I'd have to have five bodyguards right here around me."

Presumably, even if he were a millionare, he'd still be collecting boxes on Jimenez Ave.

And, besides, he's accomplishing important social and environmental functions, recycling and supporting the the homeless in a way which motivates them to do for themselves.

Other entries about interesting people:

The Armless Weaver of La Septima

Jose, the rapper of La Jimenez. 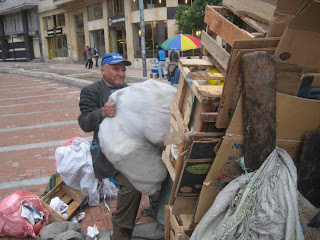 What a touching portrayal of an honorable, hard working man.Congratulations Mike. Beautifully written like so many of your articles. I really admire you for stopping to talk to that gentleman and giving hims a voice in your writing. The vision of Bogota your blog provides is quite exceptional.