I didn't mean to do it - but you're dead anyway!

Here's a useful piece of criminal advice: if you want to commit murder, just get drunk and get behind the wheel before you do it. Colombia's parliament again last week voted down a bill to impose jail terms for drunk driving. And, injuring or killing someone while driving drunk is considered 'negligence' or 'accidental,' and punishable only by house arrest.

I suppose that nowhere in that chain of acts of getting drunk, getting behind the wheel and then injuring or killing someone is there any intentionality.

"I'm sorry, but it was all an honest mistake which could have happened to anybody."

Anybody who is drunk and irresponsible, that is.

Here's a news article about a drunk driver who killed a woman and injered her friend, who said the pair were standing on the sidewalk, and then fled the scene. The incident only made the news because the driver was sentenced to prison. He claimed that the woman had thrown herself in front of his vehicle.

Sure, it's usually the pedestrians' fault for getting themselves killed by cars. 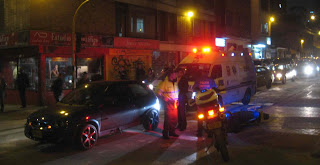