Colombia is a world leader in another category, and a tragic one: landmine victims. Each year, landmines kill or injure about a thousand Colombians - many of them civilians, and often children.

By some measures, more people fall victim to landmines here than in countries like Iraq and Afghanistan. And Colombia is the only nation in the Americas where landmines are being activally planted. Today, Colombia commemorated the International Day for Land Mine Awareness with 9,133 empty, mutilated boots arranged in the Plaza Bolívar, each representing a person killed or injured since 1990.

Colombia's guerrilla groups sow landmines to attack pursuing police and soldiers. That's evil in itself, especially since Colombian soldiers are mostly poor young men fulfilling their legal military obligation. But most of those mines stay behind waiting, unexploded - until some peasant walks by playing, hunting or searching for a wandering goat - and steps in the wrong spot. A guerrilla leader once called landmines 'the poor man's weapon.' He didn't mention that they are also the poor man's victimizer.


Colombia's 71st landmine victim of 2011 was Jorge Luis Simanca Durango, 27, a rural laborer who stepped on a mine in Ituagana, Antioquia. One other person was injured. 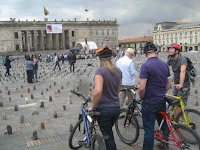 In my previous life as a journalist I interviewed several mine victims in a Cucuta hospital. One, an older man, had been a ranch worker. One day, he stepped off the road on his way home for lunch - and the next thing he knew he'd been thrown into the air by an explosion. His leg was mangled and he'd been transformed from a vigorous, capable man into a cripple who would need his family's support as long as he survived. His doctor told me that the psychological scars were as deep as the physical ones.

And this morning I heard a radio report about a university developing expandable prosthetics for children mutilated by mines. Of course it's better for such children's recovery, but it's horrifying just thinking about these kids whose lives have been damaged by such merciless weapons sowed in a futile, senseless war.

In addition to the human tragedies, landmines also take an economic toll on Colombia by putting land off-limits to activities such as herding and farming.

A boy relates: "I was nine when it happened. I worked with Papa in the fields. We had just cut down a vine to weave a basket when my friend stepped on a mine. He died and the mine opened my stomach. My papa wrapped a towel around my stomach. I must have been unconscious because I have no memory of that. He told me about it at the hospital after I had had surgery." - quote from Korubo.com

See the Colombia Without Landmines campaign.