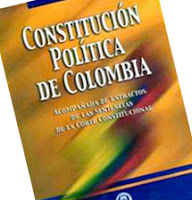 Written in 1991 for a nation in crisis, Colombia's Constitution has weathered two decades and guided Colombia into an era of stability and economic growth.

When political leaders met in 1991 to write a new Constitution the state was under siege from cocaine king Pablo Escobar and other cartels. Powerful leftist guerrillas and right-wing paramilitaries forces appeared capable of chopping the country into separate regions of influence.

The '91 Constitution was written in part in response to demands by drug cartel leaders for an end to the practice of extraditing drug traffickers to the United States for trial and imprisonment. Accordingly, extradition was prohibited by the Constitution and Escobar soon after agreed to go to prison - in the luxurious La Catedral, which he'd built for himself. (An amendment later restored extradition, and today Colombia is a world leader in extraditing its citizens for trial overseas.)

Among other changes, the '91 Constitution:

- Changed Colombia from a Catholic to a secular nation and legalized divorce.

- Recognized certain rights for ethnic and other minority groups.

- Created the Constitutional Court, which has been a progressive force and asserted judicial independence, for example when it ruled against a possible second reelection for Pres. Alvaro Uribe. Court decisions also have recognized same-sex couples, legalized abortion and eutenasia in certain cases, recognized prostitution as a legitimate profession and legalized the carrying of a 'personal dosis' of drugs - since reversed by the legislature.

- Created the tutela, a powerful tool for citizens to demand rights.

- Created democratic mechanisms such as the referendum and popular actions.

Email ThisBlogThis!Share to TwitterShare to FacebookShare to Pinterest
Etiquetas: 1991 Constitution