Today, 20 de Julio, was Colombian independence day. Colombia dates the start of its revolution from a tussle over a flowerpot in La Casa del Florero on Plaza Bolívar.

As in many nations, independence is commemorated with a military parade. Unlike most other nations, however, Colombia's military is carrying on a seemingly unending conflict. Amongst all the exhibition of the selfless young men in spotless uniforms, there were reminders that war is terrible and that, despite its recent stability, Bogotá still sometimes feels like a city under siege. 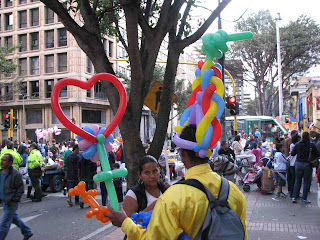 Great photos, Mike. It was a good day (although I spent it hungover...)