If you've ridden on Bogotá's Ciclovia, you've probably seen Orlando Jaramillo. In fact, you could hardly miss him, with his placards celebrating communist Cuba and denouncing the United States, and sometimes Colombia as well. 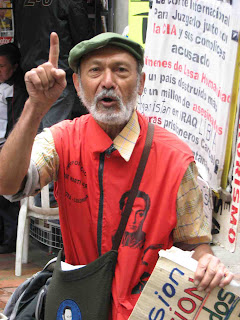 Orlando told me that he's not Cuban by nationality, but "I'm as Cuban as I can be in my soul." He's been campaigning for the island, which is the only communist nation and the only dictatorship in the Americas, since 2008. But Jaramillo celebrates Cuba's accomplishments in health care: for example, its infant mortality rate is 4.4 per 1,000 live births, compared to 6.8 in the United States and 16.1 in Colombia, and education: Cuba boasts a primary school enrollment rate of 99% and an adult literacy rate of 100%, compared to 90% and 93% for Colombia. One might, however, question the openness of that education in a one-party state with no  free press.

Jaramillo also celebrates as heroes the Cuban Five, who in 1998 were convicted for spying in the U.S. Cuba admits that the group worked for its intelligence network, but says they only spied on Cuban dissidents. However, the five were convicted of sending U.S. military information to Havana.

But Jaramillo might feel fortunate that he's not in Cuba demonstrating for the U.S. or Colombia: he wouldn't get far before going to prison. Freedom House labels Cuba as 'not free' and says that "Opposition to the ruling Communist Party is not tolerated" and "Human rights defenders and political prisoners endure torture and deplorable prison conditions."


Perhaps Jaramillo should consider balancing his praise of La Revolucion with a bit of reality. 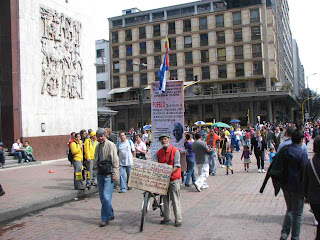 Writing in 2007, Diana Barahona had an alternative (more accurate) description of their board of trustees, which she said was "a Who's Who of neoconservatives from government, business, academia, labor, and the press."

Whatever your opinion of Freedom House's trustees and funders, your argument would be stronger if you responded to their points. Does Cuba allow freedom of the press or speech? Does it imprison dissident journalists?

Thats my grandpa! Love him!

At least he stands with pride for what he believes in, and takes as much action for it as he possibly can!

Yes, I admire people who stand for what they believe - within reason, at least.

Even Sean Penn, who goes around advertising for Latin autocrats like Chavez. But he also lives in displaced Haitians' camps, while other movie stars party and drive about in limos. Gotta respect that, even if one disagrees with things he does, too.