The Armless Weaver of La Septima

Odalis Yaneth Morales has faced all of those, and kept looking forward.

Many days, you'll find her weaving handicrafts on the sidewalk of Seventh Ave. in downtown Bogotá. The black and white rings, hats, bags and bracelets would be impressive works by anybody. But Morales has no hands or arms. She does all of her work with her toes.

Morales grew up on the Senu indigenous territory in Cordoba Department, where she said that making handicrafts is about the only employment available. She was born without arms and learned the trade from her mother.

But she earned little in the indigenous territory, which, besides being extremely poor, has at times been attacked by outlaw paramilitary groups. In addition, she wanted to study. So, two years ago, she moved to Bogotá, where she often sets up her workshop - when the police let her - on the west side of Ave. Septima a block or two south of Jimenez Ave.

Recently, a television program profiled Morales and someone who saw the show is contributing money so that she can study psychology, which she is doing via internet with a Colombian university. 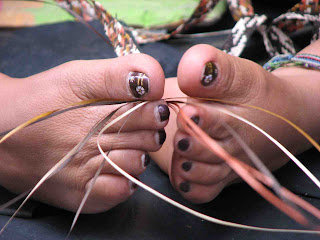 Nearby, Embera indigenous women sell their own handicrafts. But Morales is the main attraction for passersby, who gather around marvelling at the adroitness of her toes. A few people by crafts; others drop coins into her basket. Undoubtedly, the feats Morales accomplishes with her feet serve as lessons to many children. "Now, you see why you shouldn't complain about little things!" mothers admonish. 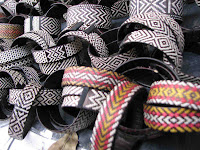 On a recent afternoon I found Morales working by the window of the Golden Palace Casino, where people seek easy money. She lifts up a hat or a bracelet with her foot and hands it to a prospective customer. She receives the money and makes change with her toes, then folds the bills up tightly and stores them.

I ask her for her name.

"I'll write it down," she says, and grasps my notebook with her toes and writes in a 'hand' that's much neater than mine.

I ask Morales whether she regrets having been born without arms.

Morales' goal is to obtain her degree in psychology and return to work with her people.

Certainly, her best lesson will be the example she's set.

As of June 2014, Morales has a small shop near San Victorino Plaza.

Born Without Hands, She Needs No Handout 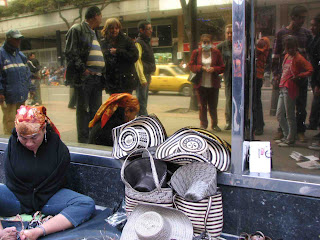 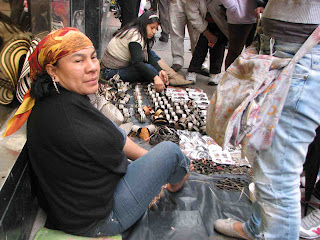 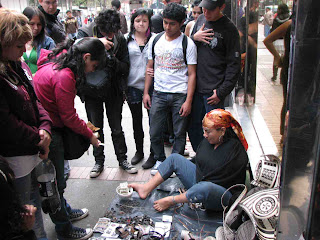 Other entries about interesting people:

The Box Man of La Jimenez.

Jose, the rapper of La Jimenez.

Wow, pretty incredible. Thanks for sharing!

Hey Mike, I was touched by your stories, particularly that of Odalis. I am from Bogota, living in Chicago.
I like the way you approach each character.

Hey Mike, I was touched by your stories, particularly that of Odalis. I am from Bogota, living in Chicago.
I like the way you approach each character.

I haven't seen her recently. Perhaps she returned to her native territory.