As everybody who follows the news knows, environmental authorities have revoked Drummond Corp.'s export license, after it reportedly dumped tons of coal into a bay. And Colombia's largest mine, El Cerrejon, has suspended operations because of a strike, while a third mine is also not operating because of pay disputes. Altogether, about 85% of Colombia's coal production is shut down. The production stoppages in Colombia, the world's fourth-largest coal producer, have hiked world coal prices. 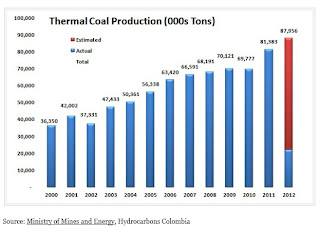 But, while Drummond and El Cerrejon will eventually restart operations, their troubles are symptoms of profounder problems in an industry which Pres. Juan Manuel Santos has called one of the 'locomotives' of the economy. Cheap natural gas produced thru fracking has reduced coal's share of the market, slumping its price and generating employer-union tensions. And, if the world someday gets serious about addressing global warming, coal, the dirtiest fossil fuel, is certain to suffer.

Coal also damages the environment on a smaller scale. El Cerrejon, for example, has expansion plans which include rerouting La Guajira's only river.


And, like many of Colombia's big resource industries, the coal industry has become entangled by accusations of human rights violations. Drummond, in particular, is fighting lawsuits alleging that the company had links to right-wing paramilitary groups, which assassinated union leaders. The company denies the accusations. Last year, a one-time Colombian paramilitary leader testified that Drummond had paid the paramilitaries millions of dollars to assassinate union leaders, according to news reports.

Coal, along with oil and natural gas production, is also distorting Colombia's economy, according to a recent OECD report. That could continue over-valuing the Colombian peso, suffocating the manufacturing sector. And, in a longer view, by continuing to produce fossil fuels, Colombia is contributing to global warming, which may very well devastate the country's environment and economy in future decades.

Is Colombia's dependence on coal and other fossil fuels inherently disfunctional or something which the country can exploit constructively?

Perhaps only time - and Colombian authorities - will tell.