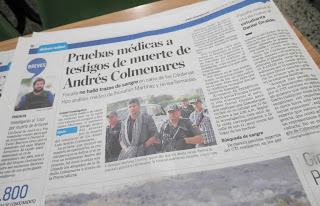 Enough already! The neverending parade of stories describing in minutiae the progress (and lack of same) in the legal procedures in the case of the death of Luis Colmenares have got me sick. His body was discovered --ñ years ago below a bridge in el Parque Virrey in north Bogotá. Did he just fall, or was he pushed? Probably, the public will never know for sure. Bogotá suffers thousands of homicides every year, as well as lots more fatal accidents, and most are simply forgotten.

But the death of Colmenares, a popular student at the elite Los Andes University, has fascinated the public, and the media, who have probably noticed that Colmenares case headlines sell newspapers.

Colmenares' death was a tragedy for his family and friends, as is every death. But it's beyond me why this one case has become a real-life reality show, with every new witness, each new arrest, each new lab test result, becoming 'news.' Sure, all of this probably does have some educational value, and it is arguably more important than another futbol game. But there's also a negative side to it. Maybe it produces a false public perception that all deaths are really taken seriously and investigated, when that's far from true. How about the people, especially the children, who get run over regularly by drunk drivers? Each of those killings generates a day or two of public anger, and then gets forgotten. As far as I've heard, the driver gets usually sentenced to a period of home detention, which he may or may not carry out, and then keeps on driving. But those victims, and many others, are important, too. But they get forgotten because whatever Colmenares' latest ex-girlfriend told investigators the other day makes headlines.

Sure, Colmenares' death was a tragedy, but only one of many. It's time to move on.

Lets talk righteously about all the more important people,.. all those students, handicapped people and users of the state health system. Lets include some bankers and politicians for good measure too. Then we can all sleep in our moral beds knowing that society has our best intentions at heart.

Completamente de acuerdo, el caso Colmenares se convirtió en una Novela más de la televisión Colombiana.
As you said his death was tragic but is was one of many, we must remember and move on.

Ya basta! Let some other crime victim get a bit of attention. Or is Colmenares the only person murdered in Bogota in recent years?

You'd think that Bogota was like Helsinki, where a single alleged murder was a big deal. Unfortunately, it's only one of many.