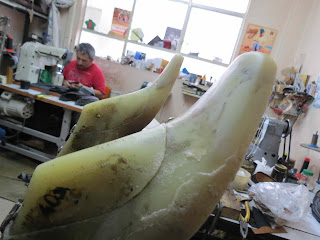 I'd long wanted to visit the El Restrepo neighborhood, because of its fame for leather works, and this weekend I finally did. 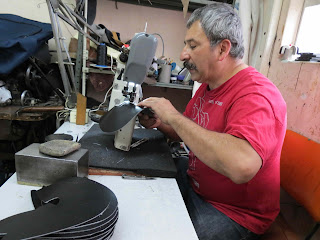 Once in El Restrepo, which is one of Bogotá's many working class neighborhoods with plain one- and two-story buildings of brick and cement, I looked around and wondered who'd tell me about the neighborhood's industry. But I didn't have to search far. A short, greying man was standing in a doorway supervising the repair of the cable dish on a nearby roof.

'Is this the leather-working neighborhood,' I asked him?

'Yes it was,' he told me, and did I want to see his workshop?

It was as easy as that. 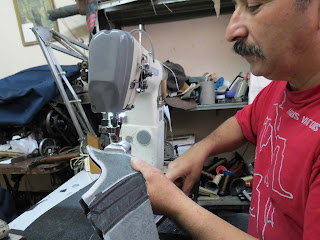 Jorge Ortiz, who's made leather products, mostly shoes, for about three decades, led me down a hall into his simple workshop adjoining the courtyard of the rooming house where he lives with his son. His one-room workshop contained three sewing machines, of varying age (the oldest had a pedal drive), as well as lots of other tools and piles of leather pieces.

He demonstrated how he takes a bunch of the cut leather pieces the factory sends him, and by folding, sewing and fitting, turns them into a shoe for a schoolkid.

On a long day, he can make perhaps 20 pairs of shoes, for which he earns several thousand pesos per pair, even tho a pair of dress shoes can sell for more than 100,000 pesos. That's working from 7 a.m. until 11 p.m. With that schedule, Ortiz can earn 250,000 pesos per week, plus some benefits from the shoe factory which subcontracts to him. Out of that, of course, he has to pay rent and living expenses for himself and his son, who just began studying industrial engineering. It's not easy being a single dad. And soon Ortiz will have to pay for his son's libreta militar, which will cost a month's minimum wage.

Altho the arrangement resembles pre-industrial Revolution times, working at home has several advantages for Ortiz. He can work at his own schedule, listen to the radio and watch television and accept work from many stores and factories.

"It's more comfortable," he explained.

The neighborhood seems to be full of these home leather workshops.

Leather workers like Ortiz must compete with both Bogotá shoe factories and with cheap Chinese imports. The domestic factory-made shoes are classier, Ortiz acknowledged.

"I do my best, but if a seam's not perfectly straight, nobody says anything," he explained. The factory shoes have straight seams, but cost a lot more.

Ortiz says the cheap Chinese shoes wear out after a few months, whereas his shoes last for years, and can be repaired and resoled.

We left Ortiz's workshop and rode our bikes a few blocks to one of the small shoe factories he does piece work for. It was a small place, with perhaps ten employees distributed in a few rooms whose floors were crowded with piles of shoes and shoe pieces. One man was sewing on soles, another inserting molds to stretch shoes to the right size. The season for school shoes is ending now, and I imagine the workshops will soon return to making dress shoes, which are more complex but also pay more. They are Ortiz's specialty.

"I make the school shoes during my down time," he says, "to pay the bills." 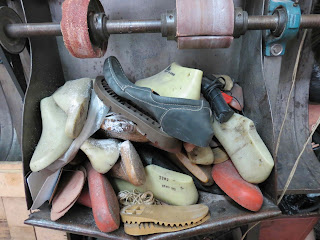 The leather comes from leather tanners in the far south of Bogotá. But those tanners have long been criticized by environmentalists and officials because of the toxic chemicals they pour into the Bogotá River. If the officials finally take action against the tanners - as they should - I wonder how that will impact the shoemaking industry?

Once the shoes are completed, they get sold in some of the dozens of shoe shops lining El Restrepo's commercial streets, altho some also sell Chinese products. Other stores sell thread, glue, soles and other supplies for the leather-working industry.

El Restrepo even has a privately-run 'Leather Museum', altho it was closed when I visited.

This week, Corferias will hold a leather products exhibition featuring expensive stuff not likely made in El Restrepo. 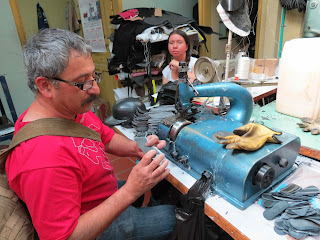 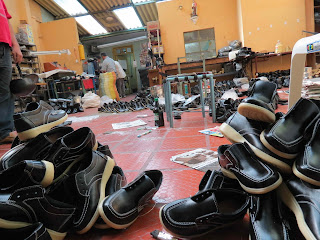 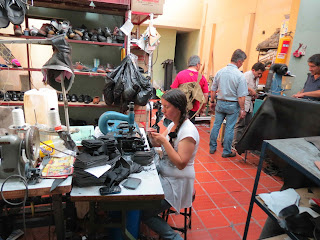 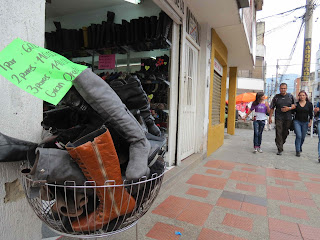 Wow!!! Certainly El Restrepo looks different these days Miguel, I used to go there to buy fabric and leather.
Excellent post Mike, I had a Colombian friend with me looking at your blog and, he was very moved by your photographs, he left Colombia more than 30 years ago.
Any way awesome shots, interesting story.

Thanks Mauricio. Restrepo is a target rich environment for photography.
, ,
I got a new camera, by the way. A Canon, which is a huge improvement over that Fuji. I hear that Fuji makes some good cameras, so maybe mine was just a lemon.
, ,
Anyway...
, ,
Mike

Mike, Canon is excellent, but next time take a look at Sony and Samsung really good brands and, not to expensive.