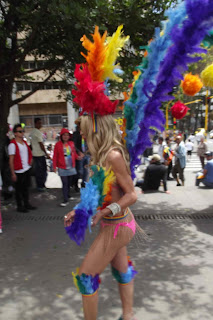 Bogotá's sexual minority, or LGBTI community, held a big, colorful march thru downtown today in protest against bullying, which has recently received attention here, as it has in many countries. 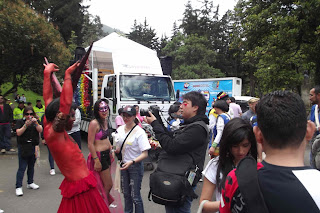 Bullying is an ugly thing, and hopefully this march will help reduce it. But I generally ask the same thing about these gay parades, which attract huge crowds of oglers, most of whom presumably are not gay. 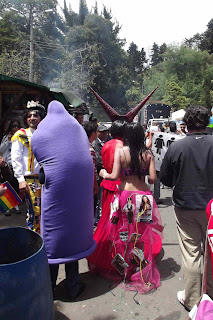 Members of sexual minorities should have equal rights and be treated with the respect due anybody. But do these public spectacles contribute to that? For the sake of employment or residence, a person's sexual orientation should be no more important than whether they are left or right-handed or blue- or brown-eyed. And, undoubtedly, countless gay and lesbian people are our neighbors or co-workers without us knowing it or caring about it if we do.
But spectacles like today's, with extravagantly-dressed transgender beauty queens dancing thru the streets dressed like characters from a fantasy movie or escapees from a freak show, do anything BUT contribute to the idea that LGBT people can also be ordinary friends, neighbors, schoomates and co-workers. Rather, they contribute to a stereotype that these are freaky individuals so different from the rest of us that they serve only as curiosities. 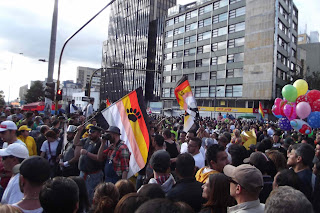 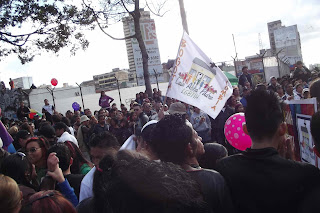 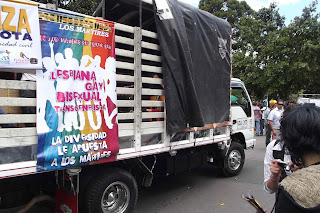 Oh Mike, I didn't expect pearl clutching from you! Pride parades have always included both celebration and advocacy. Were it not for the out-in-front drag queens, the Stonewall riots would never have happened in NYC. No one bats an eye at the outrageous outfits of straights during Halloween or Carnival. That said it appears that the overall Colombian machista culture has made harder for Bogota's Pride parade to be more diverse.

Outrageousness may have been good when riots generated progress, but I think that times have moved past that. Today, it seems to me, minorities want to be treated with respect and equality. I don't think that outrageousness helps that, particularly for sexual minorities in a still conservative, Catholic society.