This afternoon, members of a motorcyclist club laid to rest three of their members, who were killed Saturday night by an apparent drunk driver, whose release caused national outrage. 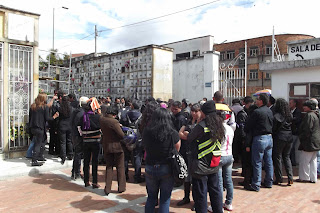 About 100 motorcyclists were headed to dinner in the town of La Calera outside of Bogotá when a couple driving a 2012 Mercedes Benz plowed into the group, killing three people and seriously injuring a fourth. The young man driving the car refused to take a breathalyzer alcohol test, but later failed a test of coordination meant to test drunkeness. 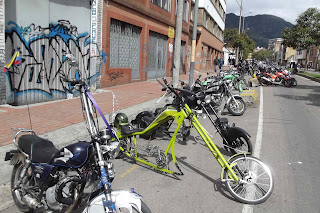 Q'Hubo newspaper quoted the son of one of those killed, also a participant in the VTM Custom motorcycle club, as saying that the car driver offered to pay him not to press charges. Later, a prosecutor released the car driver, telling him to appear the following week for a court hearing. The ensuing public furor has spurred a judge to order the driver's arrest.

This was only the most recent case of an a drinking and driving case in which the killer was treated with kid gloves. Unfortunately, money counts, and car drivers may be able to corrupt the legal system. In addition, getting drunk is still often seen as just good, clean fun, and the drinkers as not responsible for whatever damage they may cause.

I didn't mean to do it - but you're dead anyway!